Addition is one of the first maths skills your child will learn, but it'll become more and more complex as they move up through primary school. We tried out the best apps to help them master this crucial concept.
Login or Register to add to your saved resources 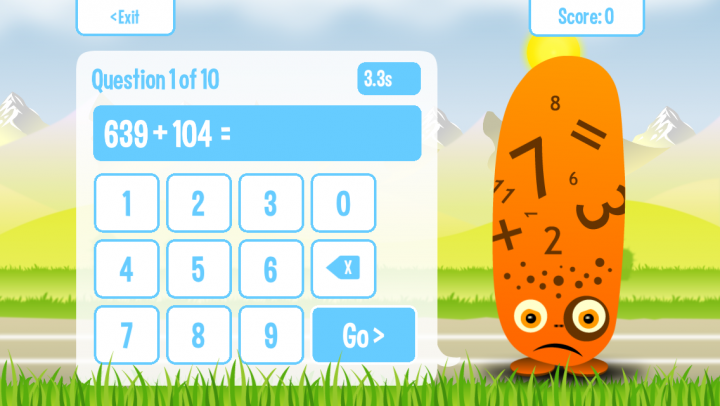 The Addition element of the game has four levels, from beginner (adding two single-digit numbers) up to extra hard (adding three-digit numbers). Working out the answers will test your child’s mental maths skills. The questions they get wrong go into My Tricky Questions, where they can practise the sums they find difficult. The Adding Money game further tests their knowledge of addition.

Children earn one go on the Squeeble Cart racing game for every answer they get right. They can also earn themselves Squeebles, stars to trade for Squeeble carts, and power-ups to use in the game. 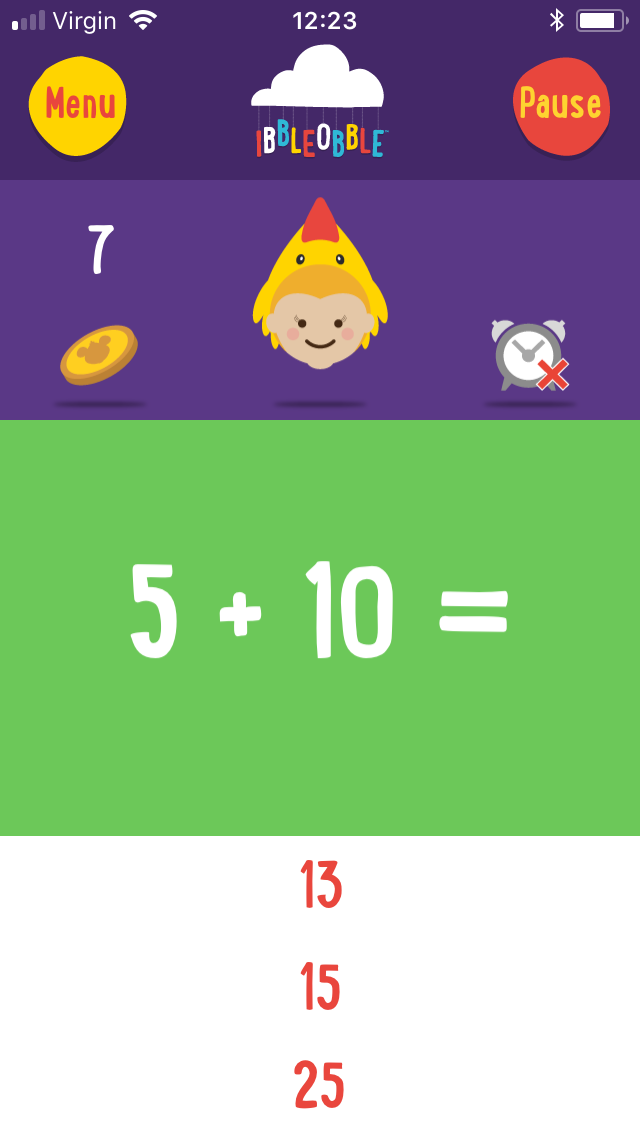 Bright colours, cute characters, cheerful sound effects and lots of praise make this addition app a hit with Reception and KS1 kids. It’s also very simple to use, making it a good choice for younger children.

Your child chooses an Ibbleobble animal friend to challenge them on a variety of addition sums. There are three degrees of difficulty to choose from (easy, medium and hard), helping them progress from single-digit to two-digit sums. The problem appears on screen, and your child has to select the right answer from three possibilities.

On the easy level, your child can take their time in answering the questions, while on medium and hard, they have to answer as many as possible in 60 seconds. Trying to beat their own top score will help them get used to solving problems quickly, and they can also earn treats for their character: cheese for Mr Mousey, or ginger biscuits for Finn the hedgehog.

Best for working with units, tens, hundreds and thousands 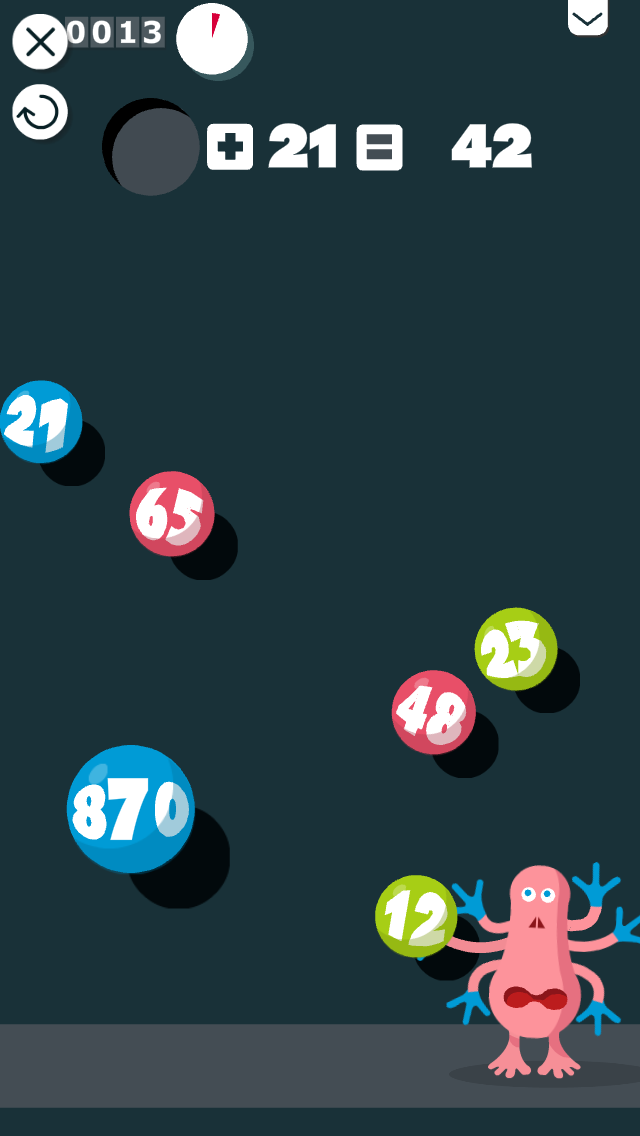 This app is designed for children who are beginning to add (and subtract) two-, three- and four-digit numbers using the column method that they’re expected to master in KS2.

The Toolbox contains three different activities for practising addition. The Stamp Game gives your child a grid showing units, tens, hundreds and thousands; they have to drag the right number of units into each slot to make a given number. The Bead Frame involves counting out the right number of beads on a virtual abacus to give the product of two numbers. And the Magic Slate gives your child written sums to solve, using the column method.

There are also three games to play that test children’s addition skills and let them earn points to redeem in the Monster Lab, where they can create their own monsters.

The app focuses on methodology. It introduces the concepts of adding units first, then tens, then hundreds and finally thousands; carrying over; and exchanging (e.g. 10 ones = one 10). This helps prepare children for adding large numbers on paper. It also adapts to your child’s level of learning, so the activities are tailored to their ability. 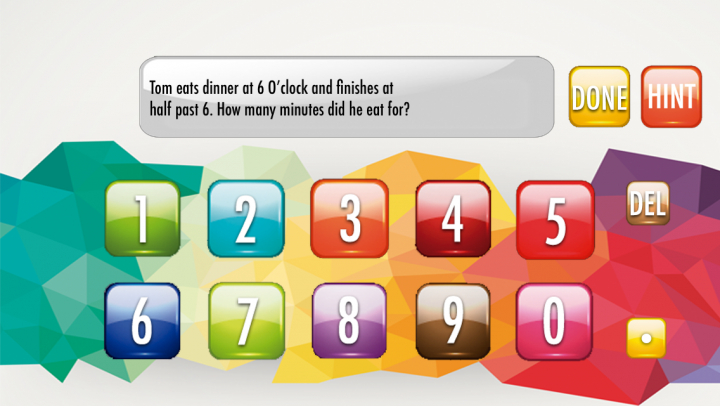 Teacher Mr Thorne has made a name for himself with his educational YouTube videos and apps. Addition Spacestation provides primary school children with a comprehensive drilling in addition, ranging from the simplest sums to advanced calculations.

Your child can choose what sort of addition problems they want to practise, including +1; +10; +2, 3 and 4; +5, 6, 7 and 8; adding single-digit numbers; number facts; multiple addition; missing numbers; doubles; word problems; adding three-digit numbers; and adding fractions and decimals. This makes it suitable for children of all ages, from Reception to Year 6 and beyond.

Each category has three levels (beginner, first class and world class) with 10 questions to answer per level. Clicking the ‘hint’ button brings up a number line to help your child solve the sum. Once all three levels are completed, your child earns a space artefact for their planetarium. 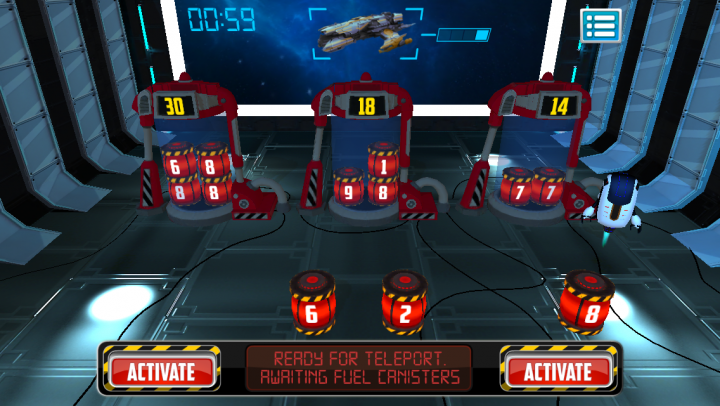 In this app, your child has to collect energy cells to repower their spaceship for its journey back to earth. Three teleports appear on the screen, each bearing a different number; your child has to drag the right numbers from a selection below into the teleport to add up to the given number.

The first levels require your child to add up numbers to make a two-digit total, while in higher levels, they’ll be adding up to make three-digit numbers. It’s a great way for them to hone their mental maths skills, working out the sums in their head.

As an added challenge, each game is timed so your child can try to improve on their best time, building speed. 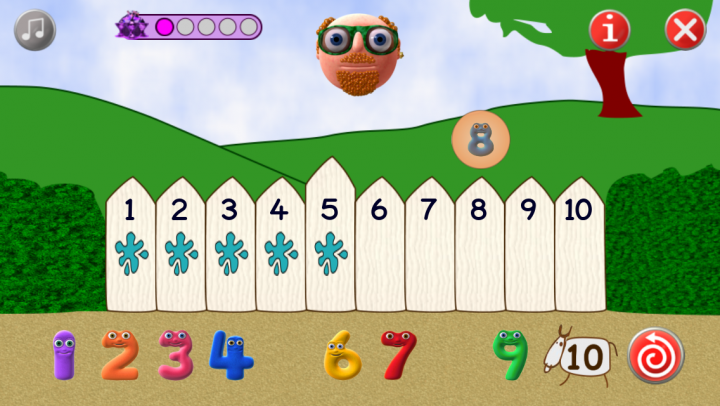 Learning number facts – basic sums that children need to be able to recall instantly, such as 3+4=7 – is an important mission for kids in Years 1 and 2. This app, featuring CBeebies favourites the Numberjacks, will help your child learn their number facts to 10 off by heart.

The app includes four mini games. In one, the Puzzler is trapping Numberjacks in his bubble. Your child has to select numbers from the line below to add up to the number in the bubble and burst it. In another, your child has to fill in the missing numbers to answer as many simple sums as they can before the bell rings. A third involves them adding two Numberjacks to find the total, and a fourth shows two sets of stepping stones that your child has to add to rescue characters from the treehouse.

The app helps your child practise skills such as counting on, adding pictorial objects and adding numbers without pictorial representation. They earn ‘brain gain’ for solving problems, which can be used to play with rewards such as short Numberjacks clips. 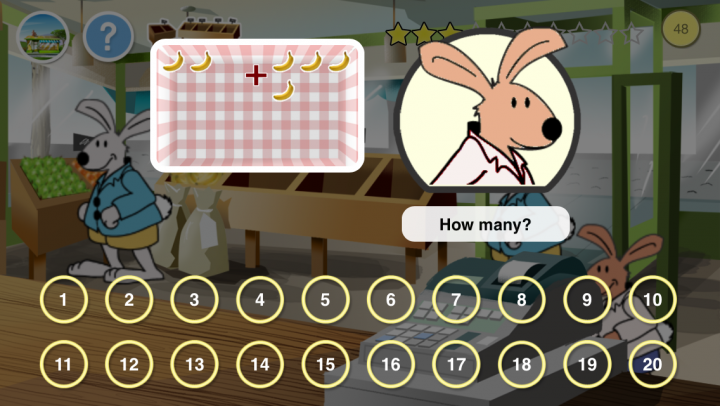 Many primary schools now use the Asian Maths Mastery method for teaching maths in Reception and KS1. Shopkeeper+ is ideal for children who are learning by this method.

In the app, your child is the shopkeeper, and has to serve their customers by adding the items in their basket. The questions increase in difficulty as they progress: at first, they simply have to count the objects in the basket; they then have to add two groups of items; then one group of objects, and finally both, are replaced by numbers. This ties in with the concrete-pictorial-abstract approach in Maths Mastery.

A number line appears at the bottom of the screen for your child to select their answer from. If they get it wrong twice, the app helps them count on to find the right answer. They earn stars for correct answers which can be used to restock their shop, starting with basics like fruit and veg and progressing to items such as skipping ropes, fizzy drinks and footballs. 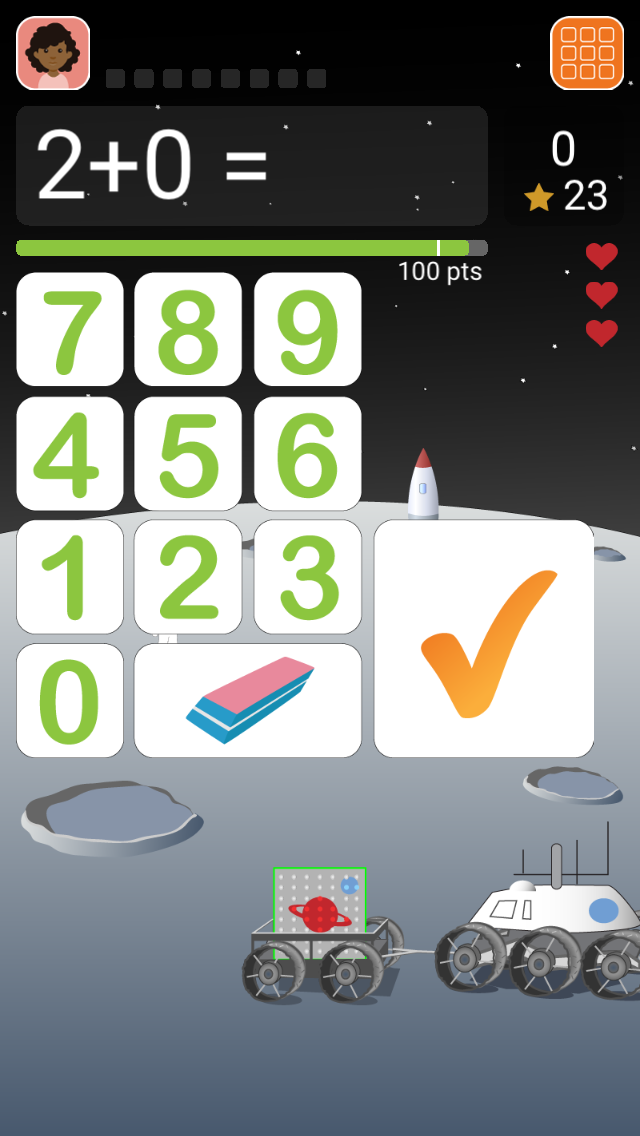 In this app, children earn a box for each addition sum they get right. They need to balance the boxes on top of each other by tapping on the screen; only once their tower is complete can they progress to the next level.

Box Drop Math tests your child on single-digit additions from 0+0 to 9+9. As they move through the levels, not only do the sums become more challenging, but they also need to stack more boxes in their tower. Golden boxes contain extra points, but if the tower tumbles, they have to start again.

Your child earns points for answering questions within three seconds – a great incentive to build speed – and awards for a run of 10 correct answers. There’s also a grid that shows you which sums they’ve mastered, and which need more practice. 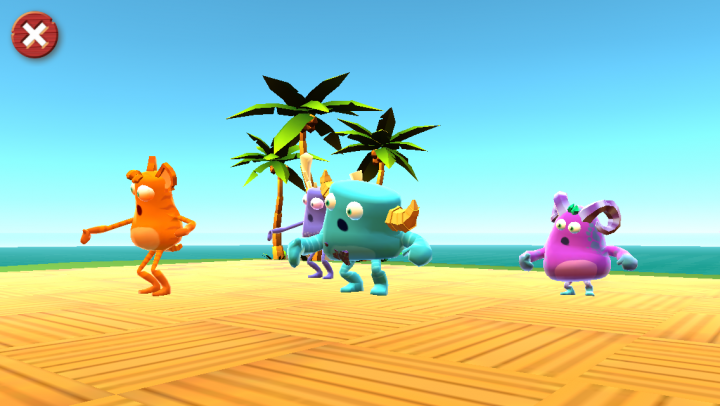 The island of MathTango is inhabited by a tribe of friendly monsters. Your child’s task is to bring magic and music to the island by completing a range of addition-themed puzzles and challenges.

The app sets your child missions that they work through by playing mini-games, such as stacking numbered bricks on a pile to add up to the number on the bottom brick, and selecting numbers from a grid that add up to a given number. They earn doubloons to buy equipment for their island: for example, a trampoline, dance floor and sound system. When they complete their mission, they’re rewarded with a monsters’ dance, and unlock a new monster for the next round.

The beginner’s pack includes single-digit and double-digit addition, adding three numbers, and a limited selection of missions to tackle. The complete package also contains subtraction questions, and a greater range of monsters, missions and store items. 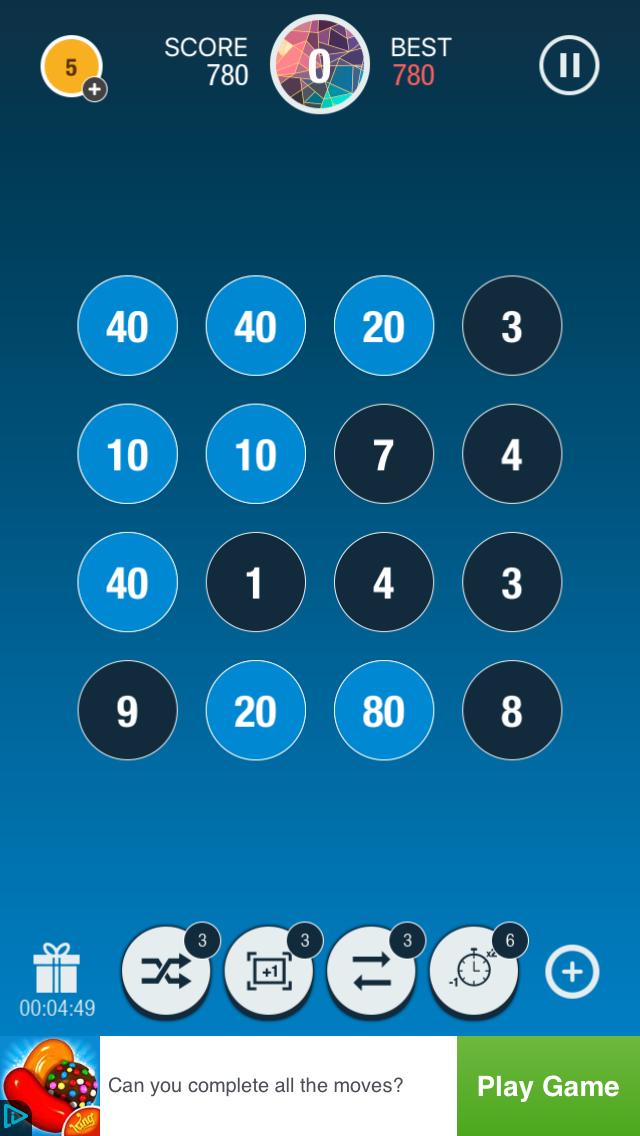 This highly addictive app will have your child begging to practise their addition skills, consolidating their knowledge of number bonds to 10 (two numbers that add up to 10, e.g. 1+9, 2+8 etc).

It presents you with a 4x4 grid of single-digit numbers. Your child has to use their finger to connect two or more adjoining numbers that add up to 10. When a number of 10 or over appears, they have to connect it to an equal number. As the game progresses, finding the options for connecting numbers adding up to 10 becomes more challenging. The game ends when there are no moves left.

When a gold number appears in the grid, your child can use it in one of their sequences to earn extra points, which can be used to reshuffle the game when they’re out of moves.