Want your child to be enthusiastic about maths? Encourage them to play with it! We reveal our favourite games-based maths apps for kids, covering everything from early numeracy to algebra.
Login or Register to add to your saved resources 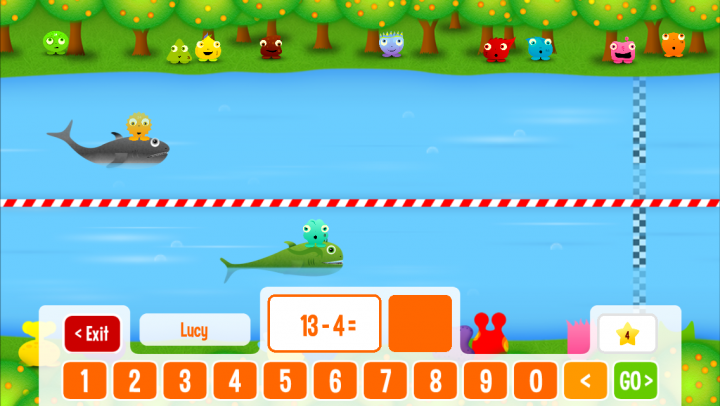 This racing game is ideal for kids who respond well to competition. Your child’s challenge is to get their Squeeble (a friendly monster) to the finish line on the back of a fish, before their opponent does.

Your child moves their fish forwards by answering maths questions correctly. They can choose what type of question to focus on: addition, subtraction, addition and subtraction combined, multiplication and division. If they get a question wrong, their fish stalls and their opponent will gain ground.

You can choose the level of difficulty according to your child’s ability. In addition mode, for example, beginner’s level questions involve adding two single-digit numbers, while extra hard features three-digit additions, such as 109+173: a good test of your child’s mental maths ability. Multiplication and division questions involve numbers up to 12x12.

Your child can play against a real-life opponent, each controlling one half of the screen; you can tailor the level of difficulty based on their ability. Alternatively, they can compete with a virtual Squeeble opponent: will they go for slow and steady Min, or super speedy Crunch? 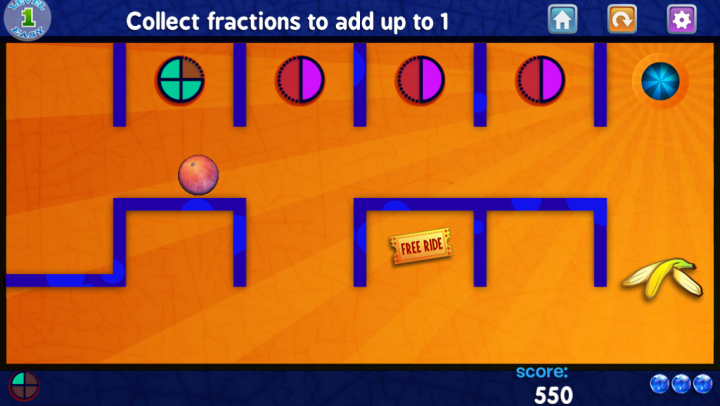 This highly addictive game involves solving maths problems that appear at the top of the screen by rolling a marble through a maze and collecting the right numbers or items to solve the problem. Your child can choose whether to move the marble by dragging it with their finger or tilting their device.

When your child gets an answer right, it unlocks the next marble maze, with a new question. There are rewards to collect and obstacles to avoid along the way, and your child can also earn stars that can be exchanged for new marbles to use in the game. 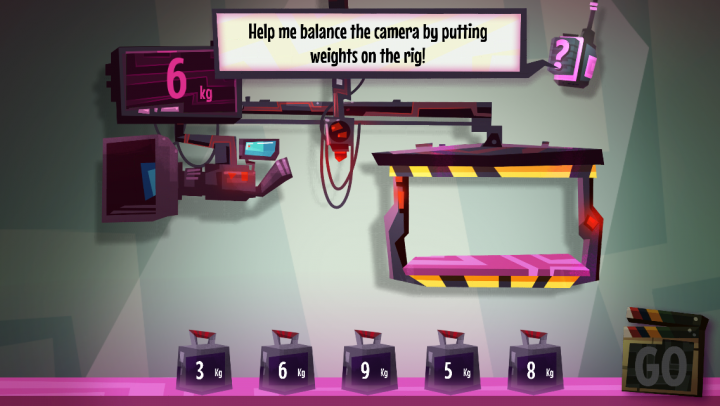 If your child protests about maths practice, Star Dash Studios is a great way to help them develop their skills without it being obvious. In the game, from the charity National Numeracy, your child is a runner on a film set. Their job is to help other members of the film crew by completing maths challenges.

Your child is given a to do list with three tasks to complete as they race around the film set. Two are not maths-based (e.g. ‘collect 10 stars’ or ‘jump over five obstacles'). The third involves finding a member of the crew and helping them with an everyday maths-focused task, such as balancing the lighting rig by adding weights to one side, or calculating how much an actor should be paid based on their hourly rate and hours worked.

Your child has to complete all three tasks to be given the next to do list; once they’ve worked through six lists, they progress to the next level with new achievements to add to their CV.

The drawback is that there is relatively little maths content in the game, but the fact that it’s embedded in gameplay will help it appeal to children who are reluctant to practise maths at home.

Best for working on weaker areas 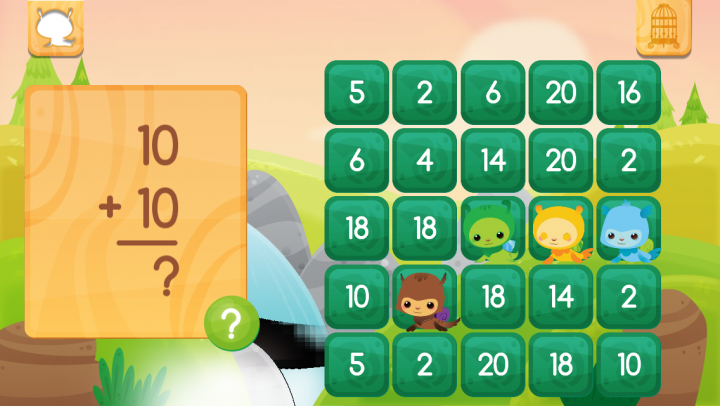 This colourful app is brilliant for honing your child’s mental maths skills. The aim of the game is to complete a line on the 5x5 bingo grid by answering maths questions correctly.

You can choose what sort of problems your child tries to solve – addition, subtraction, times tables, division or a mixture of operations – and also the level of difficulty. These range from problems involving single digits (5+5) up to complex calculations like 95/19.

If your child is stuck on a problem, they can press the question mark button for a visual hint such as a number line to help them with their calculation. If they get a question wrong, that square of the bingo grid disappears – and the more answers they get wrong, the harder it becomes to complete a line and shout ‘bingo!’

Your child collects new interactive pets for their pet pen by winning a game of bingo, as well as food to tempt them with. Their report card tracks their progress in the various different types of calculation, so you can see exactly what sort of problems they need to spend more time on. 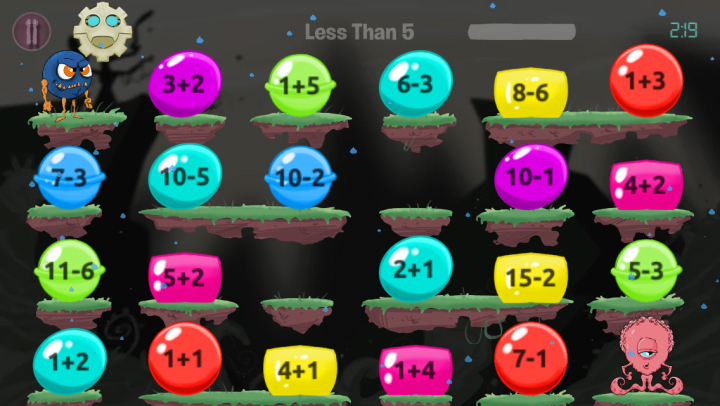 Monster Math, £6.99 for basic version or £26.49 per year for genius version, Apple and Android

Monsters Maxx and Dextra are best friends, but Dextra has been captured by the evil minions (not the Despicable Me variety!). As Maxx, your child’s mission is to defeat the minions by answering maths questions to earn candies and release Dextra.

As your child makes their way around the island, they’ll confront different minions to take on, and the number of correct answers they need to progress increases. 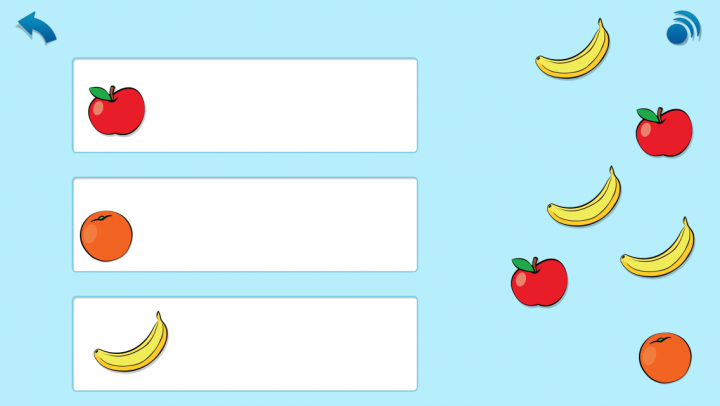 This simple, colourful app is ideal for helping your Early Years child get to grips with the basic maths skills and concepts they’ll learn in pre-school, Nursery and Reception.

There are nine different categories of question for your child to tackle: sorting and matching; counting to three; lines and patterns; counting four to six; where is it? (using positional language); counting seven to 10; patterns and shapes; numbers one to 10; comparing; and adding and taking away.

The learning activities are designed to appeal to young children, with games such as matching pairs and odd one out. When your child has completed all the exercises in a category, they’re rewarded with a personalised certificate which you can print and stick on their bedroom wall.

Best for a broad curriculum 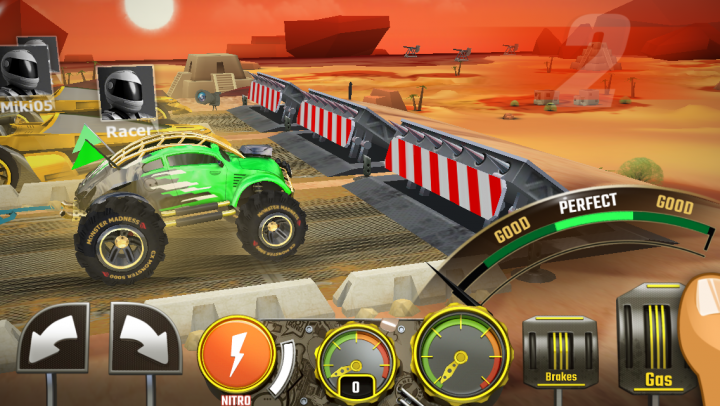 If your child is mad about racing games, they’ll love using Skidos to practise their maths skills. The app involves racing a monster truck through various different tracks and circuits, competing in single- or multiplayer mode.

For each race completed, your child is challenged to answer two maths questions to collect their prize money, which can be spent on new cars. You can select your child’s ability level and the type of questions you’d like them to answer. 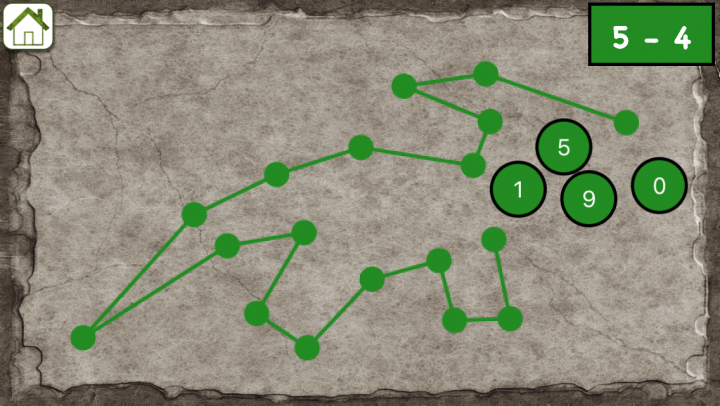 Help your child hone their mental maths skills with this clever app that will tick all the boxes with dinosaur lovers.

Your child has to choose an operation to practise (addition, subtraction, multiplication or division) and a level (easy, medium or hard). They’re then challenged with a series of maths problems; each time they click a correct answer, a line on the dot-to-dot puzzle is filled in. Once the dots are all connected, the outline transforms into a dinosaur that your child can colour with their finger.

There are also Fairy Dots, Pirates and Trucks versions of the app to tap into a variety of children’s interests. Each features a total of 32 different puzzles to complete.