A trip to London is a great way to see history. With almost every stone soaked in stories of the past, a day in the capital is a great way to make KS1 and KS2 history learning come alive. There are elements from every period of London’s past still visible in the city today if you know where to look – Francesca Fenn from Step Outside guides suggests a few things to see and do that bring the primary history curriculum to life.
Login or Register to add to your saved resources

A fabulous day out for young Tudor scholars, Hampton Court offers the full works. The breathtakingly splendid buildings and grounds, costumed tours, family audio guides, an exhibition about Young Henry VIII (before he got old and fat!), and the famous maze are all included in the entrance price. Our favourite area is the Tudor Kitchens, which allow you a behind-the-scenes look at how all those tremendous feasts were prepared. You probably won’t be able to see everything in one day, but you’ll have a fantastic time!

One of the most significant events in London's history was the Great Fire of London, which burned much of the medieval city to the ground in 1666. Sir Christopher Wren had planned to rebuild London from scratch, but the residents wouldn’t budge from their land, so the City was rebuilt to the medieval street pattern. Today, the City of London still has that chaotic and fascinating pattern of streets, many of which have curious names that indicate what used to happen there. Although Wren didn’t get his City plan built, he did design over 50 of the rebuilt churches, including, of course, St Paul’s Cathedral. Wren’s memorial to the Great Fire is The Monument, on Fish Street Hill, which can be climbed for a fabulous view of London (beware – there is no lift!). Don’t forget to look at the golden ball of flame at the top.

Can’t make it to London? Watch a time-lapse video of the changing panorama of the City from the top of the Monument or play a Great Fire of London game to get a sense of what happened in Pudding Lane over 400 years ago.

If you have been learning about the Victorians, you may also have learned about some of their great projects. London is awash with Victorian buildings, and a day exploring can take you to many of them. Here are a few which are well worth a visit, and which won’t cost a penny to see. Top tip: travel around on buses, rather than the tube. It is much more fun, and you will see much more.

Mainline stations The Victorians’ cathedrals to train travel! Most fabulous of all is the St Pancras station shed, which was the largest enclosed space in the world when it was built in 1866. Note the magnificent hotels beside the stations, from the days when train travel was truly glamorous!
The Royal Albert Hall – a beautiful concert hall in South Kensington. Walk right round it and read the frieze around the top. Opposite, in Kensington Gardens, stands The Albert Memorial, Queen Victoria’s homage to her beloved late husband.
Holborn Viaduct – a wonderful road bridge that is a fantastic technical accomplishment. Go underneath it as well as on top and admire the fabulous ironwork.
Tower Bridge Everybody’s favourite London bridge was completed in 1894, although it looks much older.

Step Outside Guides make the history of London come to life in a family-friendly day trip with illustrations, facts, puzzles and activities. Each book is designed so that children from about nine years old can hold the book and take the lead. The day’s route can be taken at a gentle pace, with time to stop and enjoy the rest-your-legs pages of games at weary moments, whilst fitting in to the cheap day return period on public transport. Good picnic spots and free toilets are highlighted, and accessibility details for buggies and wheelchairs are included. Step Outside Guides The London Treasure Trail and Down by the Thames cost £5 each. 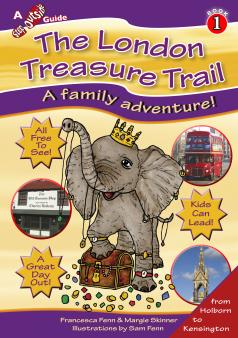 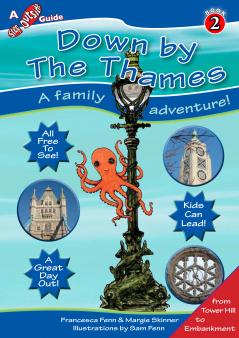