Understand how semi-colons are taught in the primary-school classroom with our parents' guides to grammar and punctuation.
Login or Register to add to your saved resources

A semi-colon is a punctuation mark that is used to separate two independent (main) clauses that are closely related.

It looks like a dot and a comma, one on top of the other: 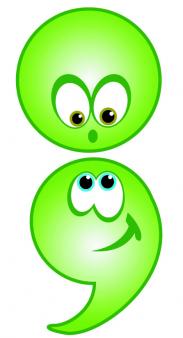 A main or independent clause is a clause that contains a subject and an object. Main clauses make sense on their own. For example:

How are semi-colons used?

Semi-colons are mainly used within a sentence to separate clauses. The clauses must be on the same theme and not be joined together with a conjunction; the semi-colon takes the place of the conjunction within the sentence.

As with commas and full stops, semi-colons make the reader ‘pause’ when they come across them. A reader should pause for a short time with a comma, for longer and more deliberately with a semi-colon and longest for a full stop.

Semi-colons can also be used to separate items within a list, to help clarify internal groups if the list already contains internal commas. For example:

Using semi-colons within lists is more of a Key Stage 3 writing target, but some teachers will introduce it in Year 6.

To use semi-colons to punctuate independent clauses correctly, a good grasp of what a clause is really does help!

If there is more than one clause in a sentence, they might be joined together by a coordinating conjunction (but, however) or by a semi-colon.

Whether a semi-colon, comma or conjunction is used to link the two clauses is the author's choice. In the case of semi-colons, they mark the end of one independent clause and the beginning of another, so they can be used instead of a coordinating conjunction, comma or even a full stop.

How are semi-colons taught in primary school?

Semi-colons are first introduced at the end of a child’s time at primary school, in Year 6. They are one of the more complex pieces of punctuation for a child to get to grips with at school.

In KS2 SATs, children will be expected to be able to insert semi-colons in the correct place within a sentence. For example:

When are semi-colons taught in the primary-school classroom?

Children will often be introduced to semi-colons first when revising types of sentences (simple, compound and complex) and how they differ from each other.

Semi-colons will be introduced as an alternative to coordinating conjunctions within compound sentences with two independent clauses.

By the end of Year 6, children will be expected to use or at least attempt to use semi-colons in their writing.