Understand how colons are introduced and taught in the primary-school classroom with our parents' guides to grammar and punctuation.
Login or Register to add to your saved resources

A colon is a punctuation mark that can be used to introduce a list or to separate two independent but linked clauses (colons are used to stress that both clauses in the sentence are closely linked and the second clause emphasises, adds clarification, or adds further detail to the first clause).

It looks like two dots, one on top of the other:

A clause is a group of words that contains a subject and a verb, for example:

When colons are used to introduce an item or series of items, the first word written after the colon does not need to be capitalised.

A colon can also be used to separate clauses within a sentence. The clause after the colon is used to

In some cases, colons are also used to introduce a quotation or direct speech. For example:

How are colons taught in primary school?

Children will be introduced to types of writing that use colons for lists, such as recipes. Children will then be asked to identify the correct location to insert a colon, and then be expected to use them for lists in their writing. For example:

Colons used to separate independent clauses are taught in in Key Stage 2.

Once children have consolidated their knowledge of sentence types and clauses, they will be introduced to colons and semi-colons used at clause boundaries. This will usually happen first through worksheets, in which they will have to insert a colon into the correct place within a sentence, before they start to use them in their writing.

When are colons taught in the primary-school classroom?

Colons to separate clauses are first introduced in Upper Key Stage 2, usually in Year 5 or Year 6, as they can be tricky to use. It can be difficult to determine when to use a colon and when to use a semi-colon at clause boundaries; semi-colons tend to be used when the clauses are closely linked and continue on from one another, and when you could use a co-ordinating conjunction to link the clauses.

By the time children are assessed in KS2 SATs, children will be expected to be able to insert colons in the correct place within a sentence. This is an example of a colon question they might be asked to answer in the Grammar, Punctuation and Spelling test: 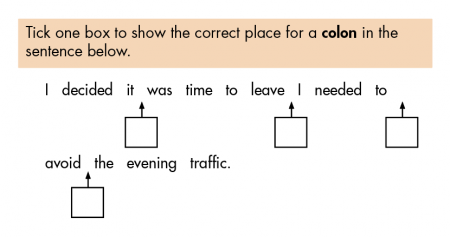 Children who leave primary school working at the expected standard for writing will be expected to make some use of colons accurately in their writing. Children who are exceeding expectations or working at greater depth will need to provide evidence that they can use punctuation such as colons and semi-colons consistently and accurately to enhance the meaning and avoid confusion within a sentence.