From simple number facts to complicated long division, these apps are full of child-appeal and will make learning how to divide fun.
Login or Register to add to your saved resources 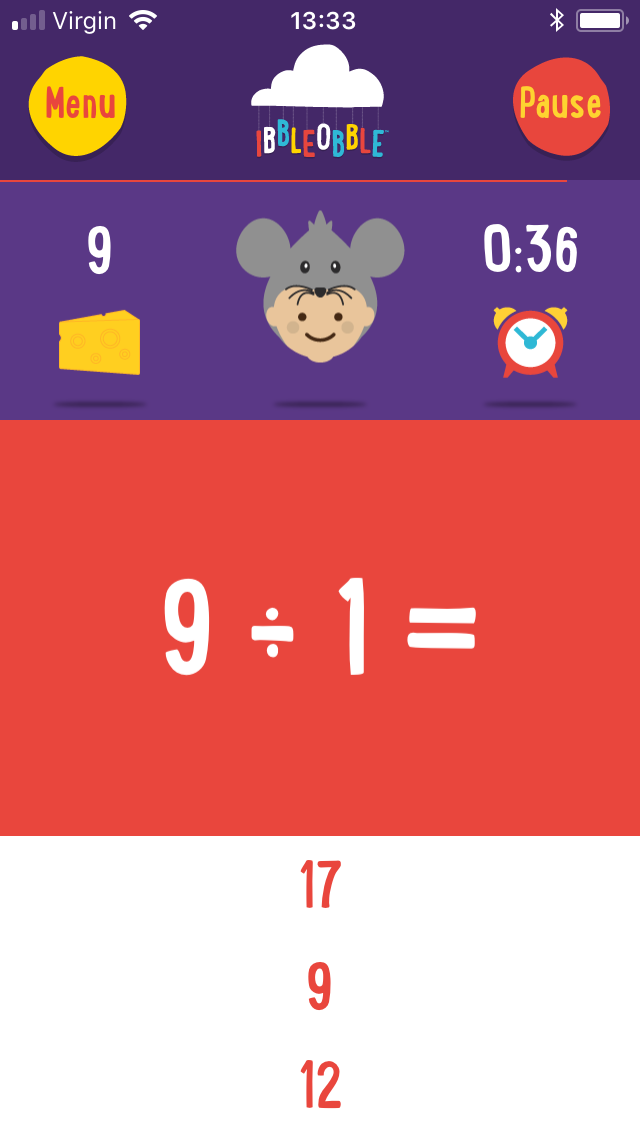 This bright and colourful app is a good way for children to master their division facts: basic calculations that they should be able to learn by heart.

Your child chooses a friendly animal character, each of which represents a different degree of difficulty, to play with. They can then select which sub-level they want to tackle: Easy, Medium or Hard, with the two hardest levels pitting them against the clock. The app then presents them with a series of division questions with three possible answers, and your child has to pick the right one.

Cheerful sound effects and positive affirmations (‘Great thinking!’ ‘You’re a star!’) will motivate your child to do well, along with the incentive of collecting treats for their Ibbleobble friend, and challenging their own top scores. 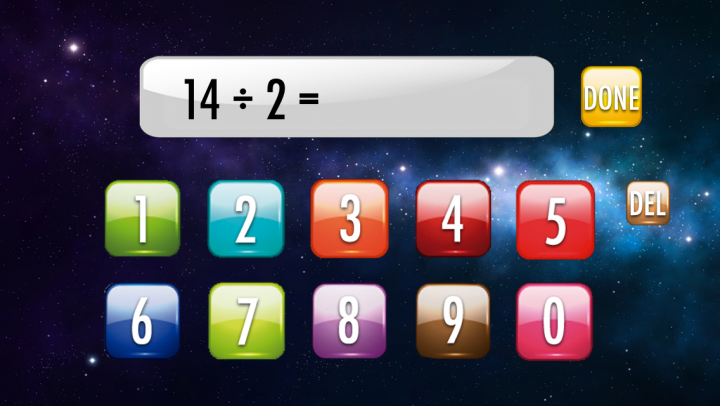 Primary school teacher Mr Thorne has built a loyal following with his educational YouTube videos, and his apps are a logical extension of this. Divide and Conquer focuses purely on division, with different levels based on dividing numbers by 1-10, 25, 50 and beyond – plus a mystery level.

To pass a level and earn a space object for their planetarium, your child has to answer 12 division questions correctly across three rounds of increasing difficulty: Newcomer, Elite and Legend. But if they get any calculations wrong, they’ll have to try again.

There’s a handy cheat sheet in case your child needs a little help, plus links to Mr Thorne’s video tutorials, which will help them learn their division facts by rote. 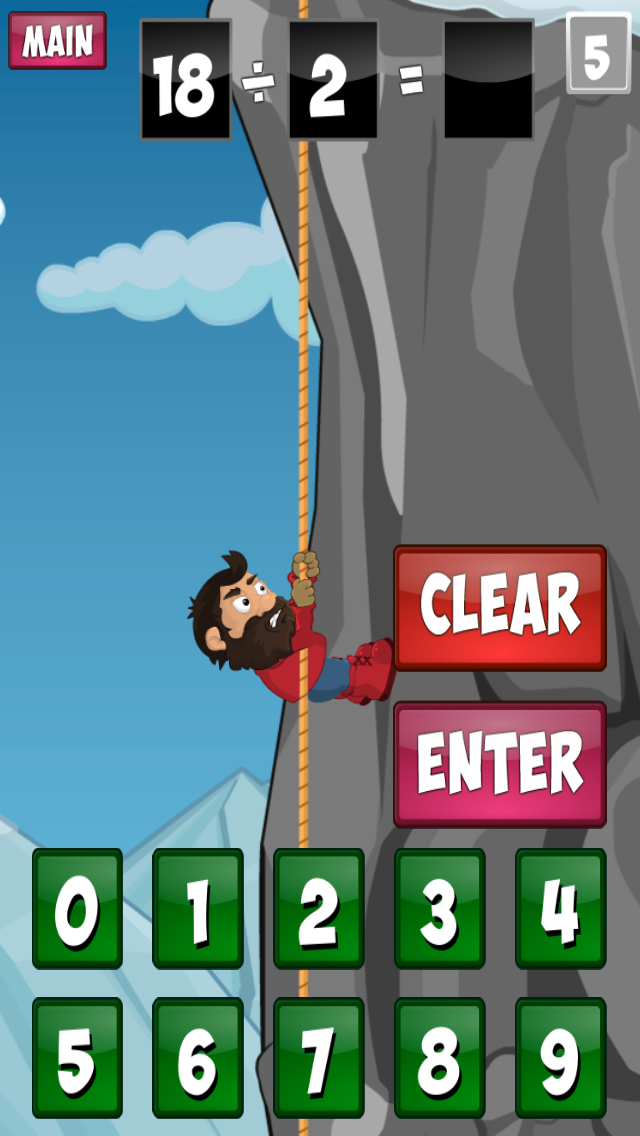 Division Descent is designed to help your child become familiar with all of the division facts corresponding to times tables up to 12x12.

Your child takes control of an abseiler, helping him descend his rope safely by answering division calculations correctly. Their descent is timed, so they can work on improving their speed, and if they complete a whole round with no wrong answers, they earn a King of the Mountain badge.

This app is good for children who need to practise division by a specific number, as you can choose which one to focus on, from 2 to 12. Alternatively, you can give them a wider challenge by selecting a group of division facts, or all facts up to /12. 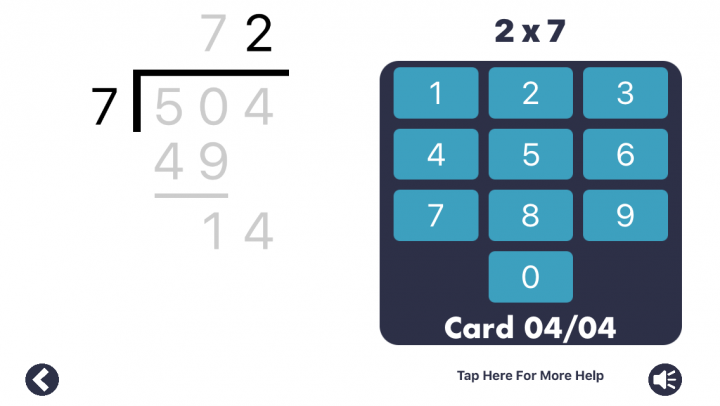 Long division (also known as the bus stop method) is a key mathematical concept for children in Years 5 and 6, and is tested in KS2 SATs. This app aims at simplifying the process by breaking long division problems into their constituent parts.

The layout is crisp and clear, with nothing to distract your child other than audio clips giving them praise for each correct step. It takes them through each problem sequentially, helping them understand their workings. There’s also a Flashcard section which times your child at solving simple division facts.

The free version of the app includes basic long division problems (without remainders) but it’s worth upgrading to the full version, which allows your child to tackle more complicated calculations involving up to four-digit numbers, including those with remainders. You can also input numbers yourself to create your own questions. 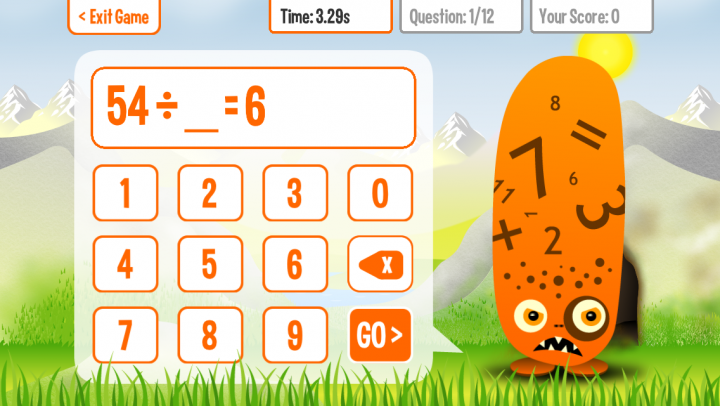 Squeebles Division 2 is high on child-appeal, with a cast of friendly monsters and rewards to be earned by practising division calculations.

In each round, your child is hit with a series of 12 questions to answer. There are six different quiz types to play: Division 1-12 (division problems for numbers up to 12); Tricky Divisions (composed of questions that your child has previously got wrong); Mix It Up (a random selection of division questions); Fill The Gap (where your child is given the first number in a calculation and the answer, and has to identify the missing number); Remainders (where your child has to find the answer including a remainder); and Extreme Division (dividing by 13, 14 and 15).

Your child earns turns on Cloud Dash – a platform game where their Squeeble has to collect stars – for completing challenges, and is also rewarded with new Squeebles and rainbow stones for runs of correct answers. 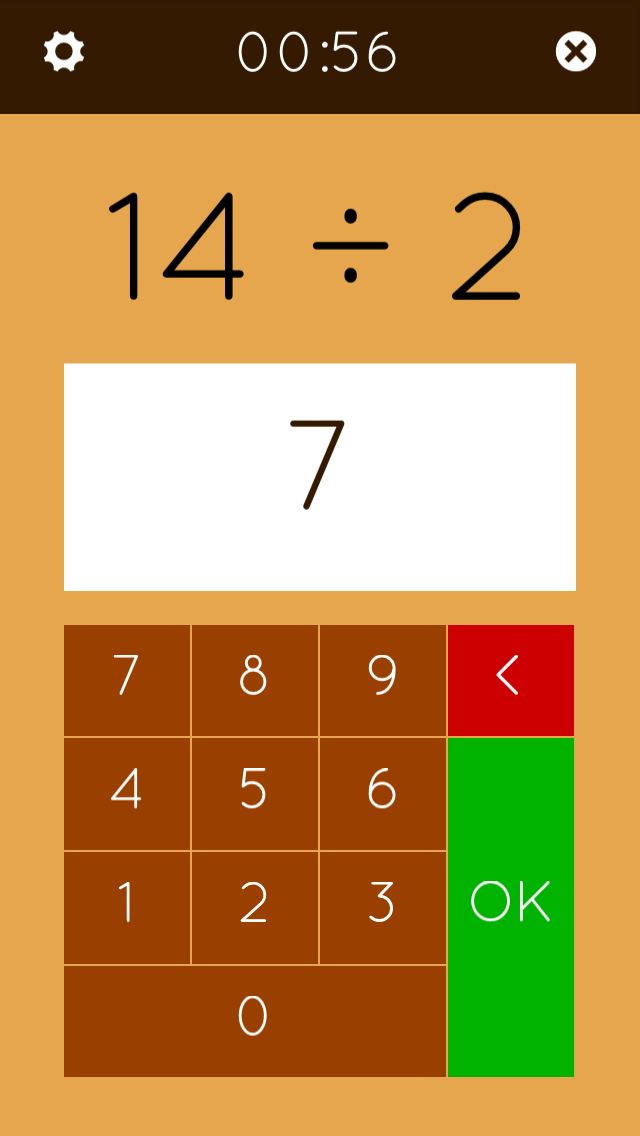 This simple app is a good way to help your child speed up their recall of division facts, which will stand them in good stead for Year 6 SATs and the 11+.

In Work mode, they’ll get to practise simple divisions from /2 to /12, with number tables to use for reference if they get stuck. Then, in Play mode, they’re given a series of quickfire division problems, with the aim of solving as many as possible in one minute.

Each time they play, they’ll be told how many questions they answered in the time limit, with a corresponding grade, so they can keep trying to improve their results. They can also view the worldwide leaderboard, and see how they compare to kids around the world. 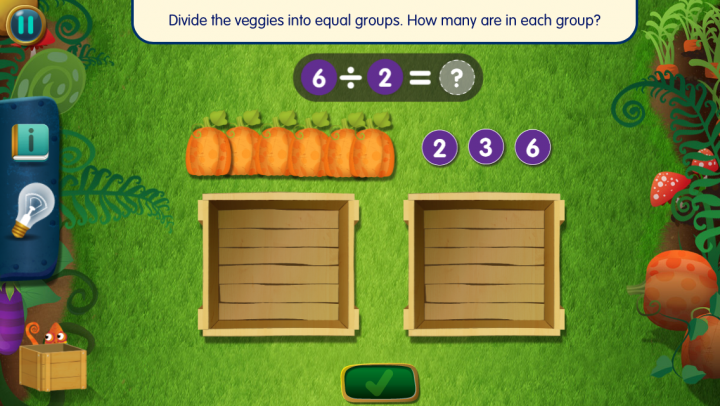 Many schools now teach maths using an approach called Maths Mastery, which involves using concrete objects to represent the figures in a calculation before moving on to using numbers. Veggie Divide is designed to tie in with this teaching method.

Your child has to solve problems by dragging vegetables into the correct boxes: for example, if the problem is 18/6, they must share 18 vegetables out equally into three boxes to arrive at the answer. As they progress through the levels, they’ll work with greater numbers of veggies, be asked to find the missing digit in a problem, and practise division facts as the inverse of multiplication.

Your child is rewarded for solving problems by unlocking a comic strip story, scene by scene. There’s also a Mystery Multiplication section of the app, which will help them work on their multiplication skills using the same methods. 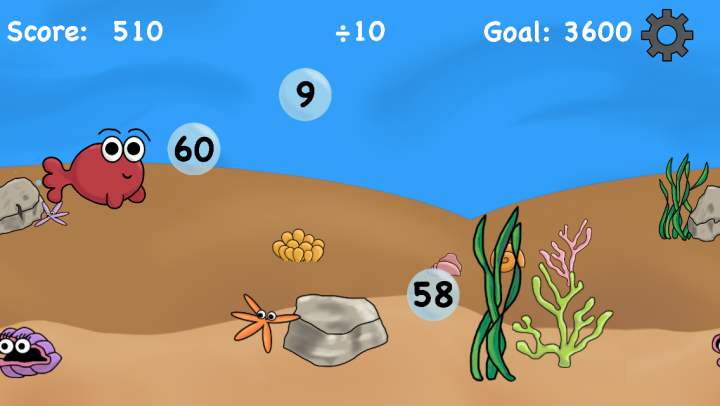 Carl is a clever fish who wins the favour of his friend Amy by solving division problems. Each level focuses on one divisor (level one involves dividing by 10). As Carl swims across the screen, your child has to swipe the bubbles that contain numbers that are divisible by the given divisor.

If they swipe a wrong number, they attract predators such as sharks and jellyfish – and ultimately lose their life. And to make matters harder, the bubbles come faster as the level progresses. Your child earns points for every correct answer, with a goal to reach on each level. Reaching the goal earns Carl a prize from Amy for his fishbowl.

This is an addictive game that will help your child become more fluent with division without even noticing.

Best for building speed and fluency 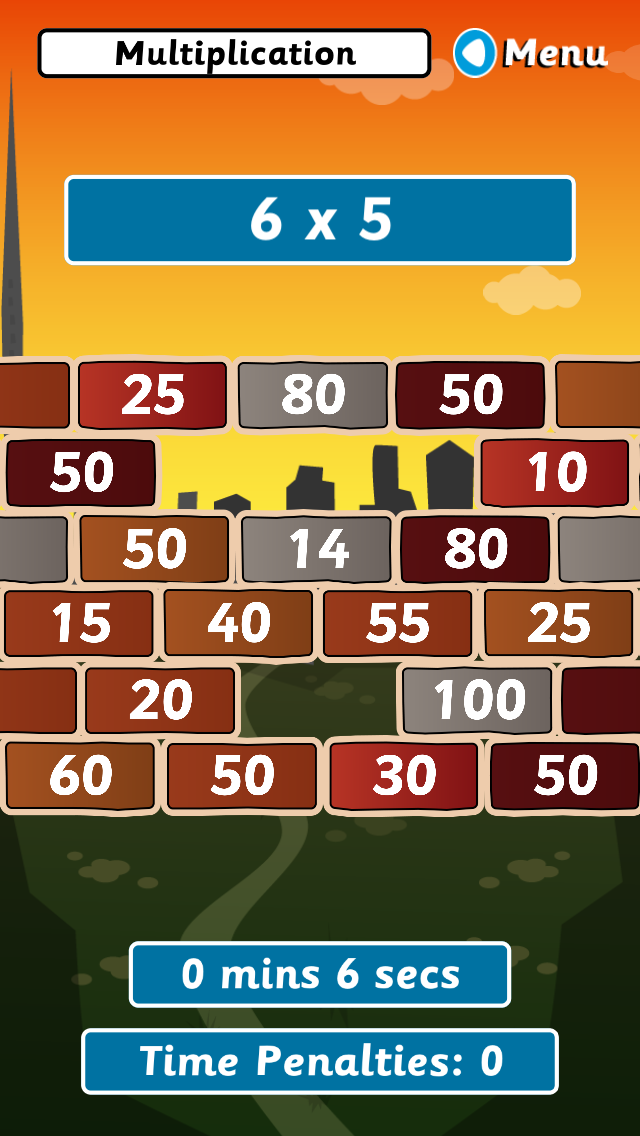 Wipeout Wall aims to help your child become faster at solving simple division problems by challenging them to beat their own best times.

The aim of the game is to break down the wall in the quickest time possible by knocking out the bricks that display the answer to a given division question. Your child can choose to practise with individual facts or groups of facts (such as divide by 2, 5 and 10), and there are 32 levels to work through.

The app records your child’s time at the end of each round, which they can then check on the top scores board. There’s also the option to play in multiplication mode. 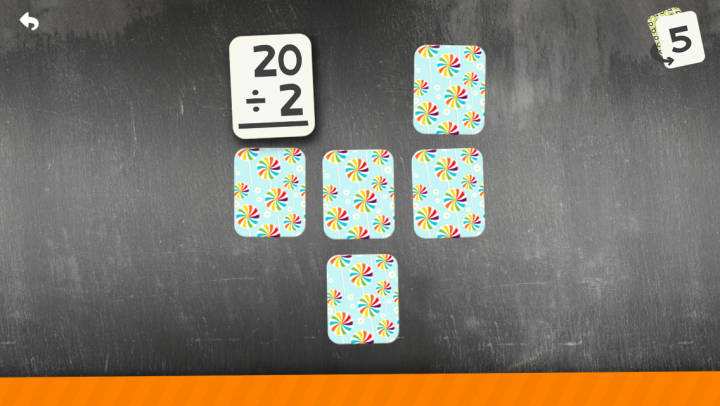 This card game based app will help your child improve their all-round memory as well as their division skills. It involves turning over cards to find the equation and its matching answer; pick the wrong card and it will flip back over, encouraging your child to memorise the positions of the cards and try again.

There are various different gameplay modes, including a practice section and speed challenges. Your child can choose whether to match equations with the card that displays the right answer, or match cards displaying equations that have the same answer. There’s also a ‘Show Me’ option where all the cards appear face up, to make the game easier for younger children.

You can customise the game’s difficulty by selecting which divisors your child plays with, and they’re rewarded for their efforts with positive feedback and a fun balloon-popping game when they have completed a level.