A magnet is an object that is made of materials that create a magnetic field. Magnets have at least one north pole and one south pole. A magnetic field is the region in space where a magnetic force can be detected.

Magnetism is the force of attraction or repulsion between substances made of certain materials, such as iron, nickel, cobalt, and steel. The force of magnetism, simply put, is due to the motion of electric charges.

Magnets are present in most electronic devices. In fact, anything that has a motor uses a magnet. Televisions, computers and microwave ovens all operate with magnets. Magnets are used to keep refrigerator doors closed and are even mounted on trucks that clean roads. You’ll also find magnets in medical devices to create a magnetic picture, in trains, and in the systems used to slow down roller coasters. More uses for magnets are found every day.

Magnets attract, or pull, objects made with iron. Paper clips, scissors, screws, nuts, and bolts are just a few common everyday objects that are magnetic. A magnet will not attract paper, rubber, wood, or plastic. It is not true that a magnet will attract any kind of metal. For example, aluminium cans are metal, but do not contain iron, therefore they are not magnetic. Steel is a metal that is made with iron, so steel objects like tools and silverware are usually magnetic.

Magnets have been used by humans since ancient Greece. It is believed that naturally occurring minerals called magnetite were first discovered by the Ancient Greeks in the area of Turkey. Magnets used to be known as “lodestones”. The Vikings were known as the first people to use this magnetic material to create compasses that allowed them to navigate across water through poor weather conditions to discover and conquer new land. It is thought that the Vikings kept the magnetic compass a secret for many years. Magnetic compasses can now be found in every ship across the world to navigate the open seas.

Today almost all magnets are manufactured using various natural materials from around the world.

Magnetism is what gives magnets their ability to attract objects made of iron or steel. A magnet creates around itself a region of space with special properties. This region is known as a magnetic field. When two magnets come near each other, their fields create forces that attract or repel.

The Earth is itself a huge magnet, and the force its field exerts on other magnets makes them point in a north–south direction. This effect is used in the magnetic compass.

The most common magnetic material is steel, an alloy (mix) of iron, other metals, and carbon. Pure iron becomes magnetised in a magnetic field but does not stay magnetic. Steel can make a permanent magnet. Once it is magnetised, it stays magnetised.

The two ends of a magnet are always different from each other. The end that points north, if allowed to move freely, is called the north pole. The other end is the south pole. These magnetic poles behave rather like electric charges. Poles of opposite kinds attract each other, while poles of the same kind repel.

Every magnet is surrounded by an invisible, three-dimensional magnetic field. A field is a region in which something varies from point to point. In Earth’s atmosphere, for example, wind speed and direction vary from place to place. In a magnetic field, the strength and direction of the magnetic effect varies in a similar way. The field is at its strongest near the magnet. The idea of a magnetic field is based on the work of British scientist Michael Faraday (1791–1867) in the early 19th century. He sprinkled particles of iron around magnets to reveal what he called “lines of force” stretching from one pole to another. These helped him to explain many magnetic effects. We now see lines of force as indicating the direction of the field, with their spacing indicating its strength.

Electromagnets are made from wire carrying a current. If the wire is coiled, the fields from each turn of wire produce a stronger field. If the wire is wrapped around an iron core, the field gets stronger still. An electromagnet can be a single coil (called a solenoid) or bent double, with two coils. Electromagnets make it easy to handle scrap metal. When the current is switched on, it creates strong magnetism that picks up a load of steel. The crane swings round, the current is switched off, the magnetism disappears, and the steel drops where it is wanted. Electromagnets have many other uses including the generation of electricity in hydroelectric dams.

atmosphere - the mixture of gases that surrounds an astronomical object such as the Earth
attraction - the power of attracting
compass - a device for finding directions, usually with a magnetised pointer that automatically swings to magnetic north
electromagnet - a magnet consisting of a core, often made of soft iron, that is temporarily magnetised by an electric current flowing through a coil that surrounds it
force - the power, strength, or energy that somebody or something possesses
friction - the resistance of rubbing of two objects against each other when one or both are moving
hydroelectric - generated by converting the pressure of falling or running water to electricity by means of a turbine coupled to a generator
magnet - a piece of metal that has the power to draw iron or steel objects towards it and to hold or move them
magnetic field - a region of space surrounding a magnetised body or current-carrying circuit in which the resulting magnetic force can be detected
magnetism - the phenomenon of physical attraction for iron, shown in magnets or by a moving electric charge or current
material - the substance used to make things
permanent - never changing or not expected to change
repulsion - a force between two bodies of the same electric charge or magnetic polarity that tends to repel or separate them

Best books about magnets and magnetism for children 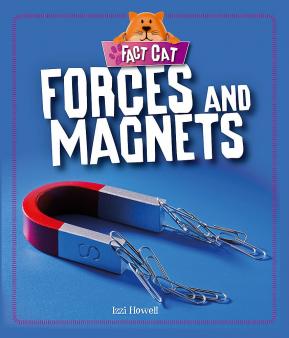 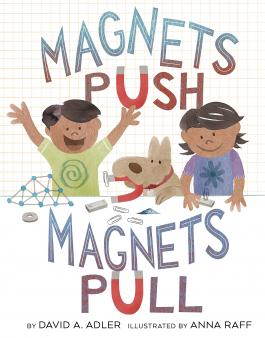 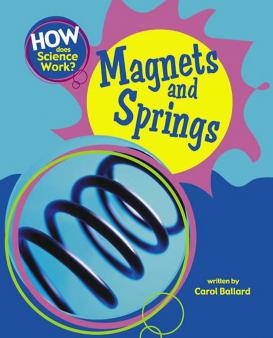 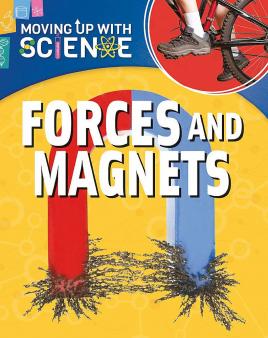 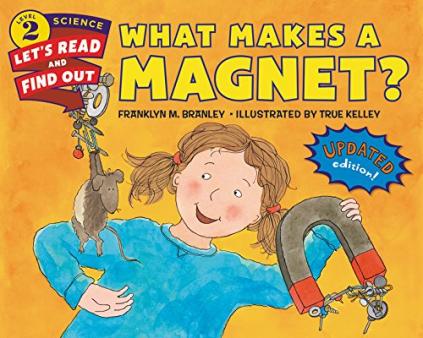 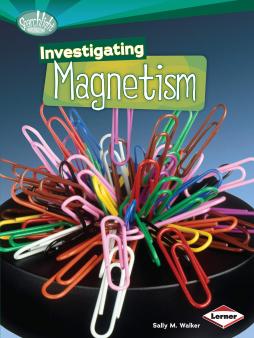 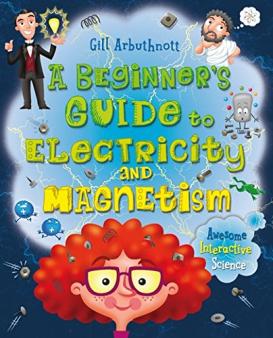