Castles are a type of home that was built to protect the people inside. People who lived in the castle included lords, who were in charge, as well as soldiers to defend it from enemy invaders, and even cooks and cleaners to keep everyone fed and tidy up. They could be very crowded places to live.

The first castles in England were built by the Normans. Different types of castles developed over the centuries that got stronger and easier to defend; at the same time, different weapons were designed to try to break into the castles and overtake them more quickly. There are loads of castles all over Britain that you can walk around to see exactly what it would have been like to live there, whether you were trying to defend the castle or trying to attack it.

The first castles in England were built by William the Conqueror and the Normans when they invaded in England in 1066. They needed a quick, easy and sure way to defend all the land they’d just won, and castles helped them to this.

The castles the Normans built were called motte and bailey. Windsor Castle was originally built like this.

Mottes were large hills that were made by piling dirt into a high mound. A home was built on top for the lord (who was in charge of the castle) to live in with his family. This was called the keep, and a fence was built around it for extra protection. Because the keep was built so high, he could see far into the distance and was able to tell if enemies were coming.

At the base of the motte was the bailey, which was like a little village – people who worked for the lord lived there, including tradespeople like blacksmiths. A high fence was also built around the bailey.

The motte and bailey were protected by deep ditch full of water all the way around it called a moat.  You could only get into the bailey by crossing over the moat, so they built a bridge that could be lowered and raised depending on whether friends or enemies were trying to get in. This was called a drawbridge.

Motte and bailey castles were first built with wood, and then replaced with stone keeps and walls because stone is a stronger material. It doesn’t burn like wood does, and it is more difficult to knock down a stone wall than a wooden wall.

Many people lived at the castle, not just kings and nobles. Castles also had constables who looked after all the things that needed to be done to keep the castle running smoothly, like cooking all the meals, caring for the horses and cleaning up after everyone. The constable was like a manager, and he became in charge of the castle when the lord was away.

One of the worst jobs at the castle was to be a gong farmer. Toilets, called garderobes, were built along the inside of the castle walls – everything just dropped down into the castle moat or into ditches called cesspits. Gong farmers had to clean out the cesspits.

Dungeons were in the basements of castles, where prisoners were kept.

When you look at a castle, you’ll see tiny windows that look like slits. These "arrow loops" were made so archers could fire arrows through them to defend the castle. They are narrow so that it was hard for the attacking archers to fire arrows back through them.

Life at the castle wasn’t all about fighting battles. The lords and ladies held banquets in the Great Hall of the castle, and invited jesters and singers to perform for everyone.

Castles weren’t very comfortable places to live. They could be very damp and cold, especially in the winter.

Castles took a lot of planning to build. Special stones would be cut from quarries and shaped for certain parts of the castle. The stones were put together using mortar as a kind of glue. Mortar was made from water, sand and lime, and was smeared in layers and cracks between stones – when the mortar dried, the stones would be kept firmly in place.

At first, all towers were first square, with corners. Later people realised that round towers were actually harder for weapons like trebuchets to destroy – the impact didn’t have as much of an effect on a circle as it did on a square.

Even though castles were homes, their main purpose was to defend. After William the Conqueror and the Normans invaded England, they immediately set to work building motte and bailey castles – these gave everyone who lived inside a good way to defend themselves against enemy attackers, and they were built close enough together so people in one castle could warn people in another one quickly if they saw the enemy coming. Mottes (hills) gave the castle lord a way to see far off into the distance from the security of his keep, so he could see exactly what the enemy was up to without having to leave the safety of the castle.

Over the next few centuries after the Normans castle designs developed and became so better and better at defending their inhabitants. New features were added such as round towers, layers of walls, and lots of places for soldiers to hide and surprise the enemy when they attacked.

Castles began to be less secure with the development of cannons powerful enough to damage castle walls in the 15th century. When an enemy could destroy the castle walls by continually firing cannons at them, they could no longer protect their inhabitants. Most castle building had stopped by the 16th century. Many castles fell into disuse and became ruins.

When an enemy army set up to attack a castle, this was called a siege – they’d use different offensive tactics to try to break down the castles defences, and because the people in the castle couldn’t really go anywhere the enemy army could take as long as they wanted. Sometimes, they’d make life hard for the people inside the castle just by being there and not letting them go outside to get food and supplies; if the castle residents weren’t prepared, they could even starve.

These are some of the features that helped defend castles against enemy attacks:

To try to take over a castle, the enemy would use some of these tactics and weapons:

Barbican – a structure attached to the front of the castle walls that provided extra defence; it was sometimes part of the gatehouse
Bailey – a large courtyard inside the castle walls (also called a ward)
Bastion – a small tower at the end of a curtain wall; in a concentric castle, it’s built along the middle of the outside wall
Battering ram – a large, strong beam on wheels that was hit repeatedly against castle doors in order to break them down
Battlement – a narrow wall built along the outside edge of the wall walk, with merlons and embrasures on top that soldiers could use to defend the castle
Cannon – a weapon that used gunpowder to fire a ball of rock or metal at castle walls to destroy them. Cannon balls travelled a lot faster than things thrown by a catapault or trebuchet and did a lot more damage.
Catapult – a machine that could throw things at castle walls to destroy them
Concentric castle – a castle that was built with two or more curtain walls around it, giving many levels of defence to the castle
Curtain wall – a chain of walls, connected by towers, that were built around the keep and the castle courtyard
Drawbridge –  the bridge over the castle moat that could be raised or lowered, helping to keep enemies out
Dungeon – where prisoners were kept, usually located in the cellar of one of the towers
Embrasure – the name for the empty space in between merlons along a castle wall, in between battlements; someone could fire a weapon from an embrasure, then hide behind the merlon
Garderobe – the name for a toilet in the castle
Gatehouse – structures built to defend entrances to the castle, such as towers and bridges
Great Hall – a large room in the keep or another part of the castle where the lord had meetings and held banquets and celebrations
Keep – the main tower and stronghold inside the castle walls, where the lord lived
Loophole – a narrow slit in the castle walls that were used as windows, ventilation, or to shoot arrows through when defending the castle
Merlon – higher parts of the castle wall, in between battlements, that could be used to hide behind for protection when defending the castle; the spaces between merlons are called embrasures
Moat – a deep ditch filled with water that went all the way around the castle walls
Mortar – a mixture usually made from water, sand and lime that was used to build castle walls; it hardened in between the rocks to form a smooth barrier without any holes.
Motte – a large hill that the keep would be built on
Murder holes – holes in the ceilings of the castle entrance that rocks or hot oil could be poured through if invaders had entered
Portcullis – a gate that could slide up and down in front of the castle doors
Ramparts – steep defensive barriers or walls around castles
Siege tower – wooden towers on wheels that were built at the castle by the attackers so they’d be the same height as the castle walls; they gave the attackers an easy way to cross over the walls, and sometimes had battering rams in them  so the doors could be knocked down at the same time.
Tower – towers were built into castle walls, or around the outside of the keep; they were first built square, but then people found that round towers were actually harder to destroy because they didn’t have corners
Trebuchet – a big slingshot that could throw rocks, or even fireballs over the castle walls; it could shoot things farther than a catapult could
Turret – a small tower on top of one of the main towers of the castle, which provided a good lookout point for people to see any approaching enemies
Wall walk – a passageway along the top of the castle walls

Best books about castles for children 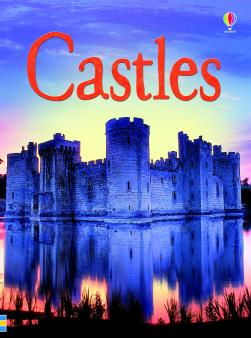 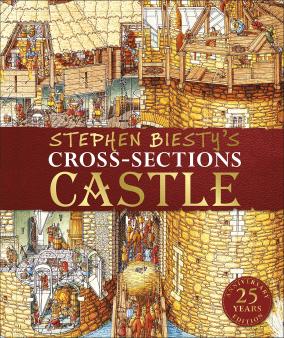 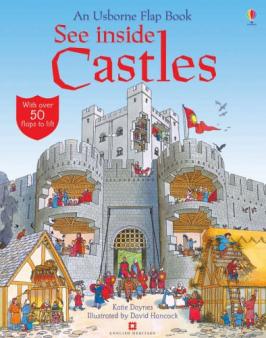 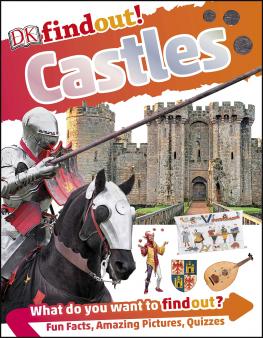 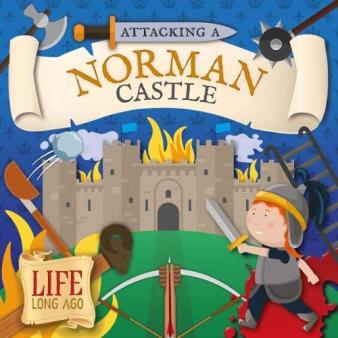 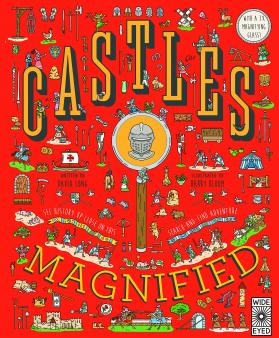 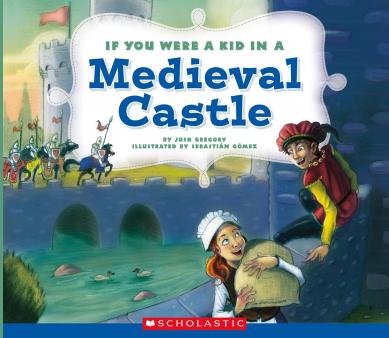 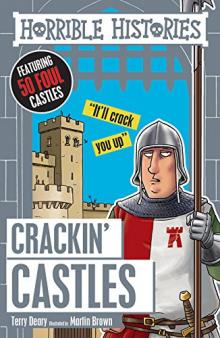 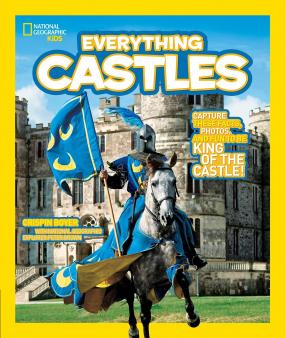 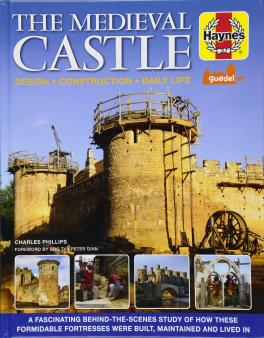 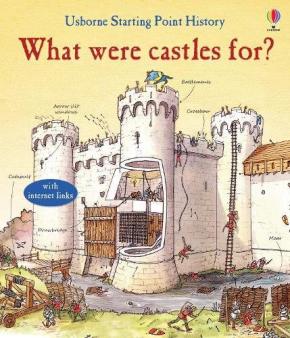 There are lots of amazing castles to visit in the United Kingdom. Consult Historic UK’s interactive map of castles in England, castles in Scotland and castles in Wales to find out where your nearest castle might be!

Win Stories from The Couch Potato and Pals!

Spuddy learns that balancing screen time and playtime is the root to true happiness. Enter to win a copy of The Couch Potato plus more Food Squad titles!
Win a copy of “The DNA Detectives – The Stone Age Mystery” by Dr Mandy Hartley.

Be the favourite this Christmas and give a personalised gift straight from the heart. Enter for a chance to win £100 Asda Photo Gift voucher!