Northern Ireland is the smallest country in the United Kingdom. It makes up part of the UK along with England, Scotland and Wales, but is situated on an island in Western Europe called Ireland.

Northern Ireland takes up one-sixth of Ireland, while the rest of Ireland is an independent nation, the Republic of Ireland.

Despite its small geographical size, Northern Ireland is a country of culture, producing famous writers like Seamus Heaney and C.S. Lewis as well as noted actors like Liam Neeson, James Nesbitt and Kenneth Branagh.

1. Northern Ireland is part of the United Kingdom, but it makes its own laws. The Parliament buildings of the Northern Irish government, in Belfast, are called Stormont.

2. After Scotland, Northern Ireland is the second most sparsely populated country in the UK.

3. In 1921 the island of Ireland was divided into two parts. Northern Ireland remained part of the United Kingdom and the rest became known as the Republic of Ireland.

4. Although English is the most popular language in Northern Ireland, Chinese is the most widely spoken minority language!

6. Lough Neagh is a huge lake in Northern Ireland – in fact it's the biggest lake in the British Isles and every county except Fermanagh touches the shores of the lake!

7. The Giant's Causeway is a famous rocky area of the coast in County Antrim. It's made up of thousands of hexagonal blocks of rock, formed by ancient volcanic eruptions.

8. Belfast is the capital city of Northern Ireland. The land that Belfast occupies has been occupied since the Bronze Age!

9. The population of Northern Ireland is about 1.8 million.

With an average of 157 wet days a year, it rains less in Belfast than it does in Scotland, but the capital of Northern Ireland is still wetter than Dublin, the Irish capital!

The world-famous ship the Titanic was built and launched from Belfast Harbour. At the time it launched, it was the largest man-made moving object on Earth! The Titanic was built by the Belfast shipyard Harland & Wolff in 1911. The RMS Titanic sadly sank after hitting an iceberg on April 15 1912, on her very first voyage.

Although Northern Ireland is sometimes called Ulster, the old Ulster actually included areas that are now part of the Republic of Ireland.

As in the rest of Ireland, there are no snakes or toads in the country!

At its closest point, Northern Ireland is only 13 miles across the sea from the Scottish coast. Apparently, on a clear day you can stand in Antrim, look across the water and see houses in Scotland!

Northern Ireland is situated on an island in Western Europe called Ireland. In 1921 Ireland was divided into two parts. Northern Ireland remained part of the United Kingdom and the rest became known as the Republic of Ireland.

Northern Ireland's history is a little complicated! About 800 years ago, the Kings of England gained control of Ireland, but years later, the Irish managed to get rid of most of the English! But in the mid-1600s, the famous English military leader, Oliver Cromwell, took over all of Ireland. Since England was Protestant while Ireland was Catholic, there was a lot of hostility between both sides.

The people who wanted an independent Ireland became known as republicans or nationalists because they wanted Ireland to become a republic, a government where people come together to make laws. The people who didn't want independence for Ireland were referred to as unionists because they wanted to retain their union with the UK. The unionists lived mostly in Northern Ireland.

By 1921, the UK agreed to recognise Ireland as an independent nation, but kept Northern Ireland under the Government of Ireland Act.

But this didn't stop the problems, unfortunately. The reason why? Republicans were willing to continue to fight to make Northern Ireland part of the rest of Ireland while Irish unionists were willing to fight to prevent it. There were lots of protests and riots. The crisis escalated in 1969 when British troops were sent in to prevent religious violence between the Protestants and the Catholics. The clashes between the two sides were known as the Troubles.

Bloody Sunday was one of the most significant events of the Troubles. It took place on the 30 January 1972, when British soldiers shot 28 civilian citizens and 14 people died.

Religion has been the cause of many tensions in Northern Ireland. Most people in Ireland are Christians, but in Northern Ireland they predominantly belong to the Protestant Church, whereas in the neighbouring Republic of Ireland, most people belong to the Roman Catholic Church. This has caused many problems between the two religions that exist in Ireland, but things are changing.

Even though he is the Irish patron saint, St Patrick was actually born in Britain not Ireland! Some believe he was kidnapped as a teenager and brought to Ireland. St Patrick was credited for bringing the religion of Christianity to Ireland. St Patrick's Day is celebrated annually in Northern Ireland as it is in the rest of Ireland on March 17. It is a public holiday and celebrations generally involve public parades and festivals, and the wearing of green clothes or shamrocks.

Agriculture is one of Northern Ireland's most important industries and there are currently over 29,000 farmers.

Belfast is the largest centre of population, with more than a third of people in Northern Ireland living in or near the capital. Londonderry or Derry is the largest city after Belfast. It is found in the northwest of the country beside the River Foyle.

Like the rest of the UK, the pound sterling is the currency of the country.

English is the most commonly spoken language but Irish (or 'Irish Gaelic') is also significant, as well as a language known as Ulster Scots. With more people from other countries moving to Northern Ireland, other languages like Chinese, Urdu or Polish are also becoming more common.

One of the most popular meals in Northern Ireland is known as the 'Ulster Fry': bacon, egg, soda bread, sausage, potato bread, mushrooms, fried tomato and baked beans! Potatoes are a key ingredient in the food of Northern Ireland. Traditional dishes include champ (mashed potato with spring onions), farl (potato bread) and boxty (potato cake).

Northern Ireland enjoys its sport! The most popular are football, gaelic football and rugby union, although athletics, boxing, cricket, golf, hurling (an outdoor stick-and-ball game similar to hockey and lacrosse and traditional in Ireland) and snooker are also popular. 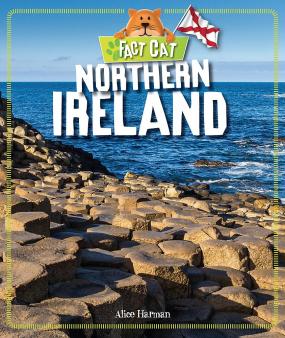 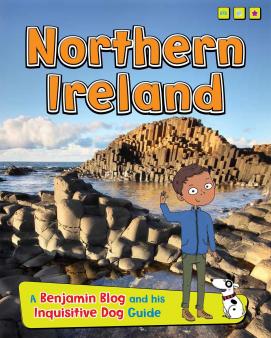 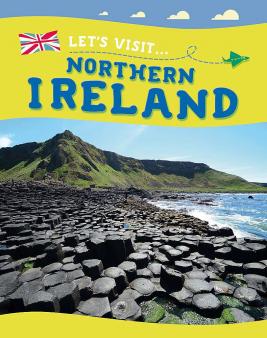 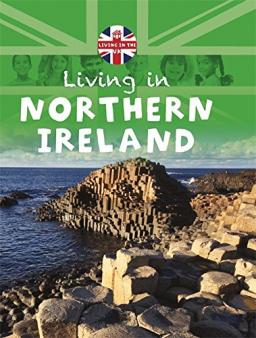 The myths and legends of the Giant's Causeway explained

Find out about the Battle of Moira, a legendary clash which took place in 637 AD between Domnall the High King of Ireland and his stepson Congal Cáech, King of Ulster, in the BBC Bitesize guide

Watch an animated summary of citizenship and politics in Northern Ireland, created by the BBC

BBC Newsround explains the history of Northern Ireland and the Troubles

Facts and figures about Northern Ireland for children

Find out more about the amazing Giant's Causeway

Carrick-a-Rede Rope Bridge was first erected by salmon fishermen in 1755. Would you be brave enough to walk over it?

Cave Hill is an iconic landmark of Belfast

In Belfast two museums are great for kids: W5 and Titanic Belfast