What are rocks and soil?

Rocks are made of one or more minerals. There are three main classifications of rock, based on the way the rock was formed: sedimentary, metamorphic and igneous.

Soil is formed of fine rock particles mixed with air, water and particles from dead plant and animal matter. There are three main types of soil which are classified according to the amount of sand and clay in them.

Some rocks, like obsidian, are made from just one mineral. Other rocks are made from two or more minerals – for example, granite is made from feldspar, mica and quartz. Common minerals that form rocks include: feldspars, mica, quartz, calcite, dolomite, amphiboles, pyroxene and olivine.

Rocks are used for a range of purposes depending on their properties. For example, granite is very hard and impermeable, so it is often used as a building material; while chalk is a rock that wears down easily and so is used to write and draw with. Clay is used to make things like pottery and crockery because it is malleable – we can mould it.

Sedimentary rocks are formed when small particles of mineral are washed down river and are crushed and squashed at the bottom of a lake or sea while more ‘sediment’ is washed on top. This happens over millions of years. These rocks build up in layers and often have the remains of living creatures and plants fossilised within them. Examples of sedimentary rocks include sandstone, chalk, limestone and shale. Sedimentary rocks are porous and can easily be weathered or worn down.

Igneous rocks are formed from magma which is a hot, liquid found inside the earth. This either cools and forms rocks under the earth’s surface, or flows out of erupting volcanoes as lava and may mix with other minerals. It cools it forms new rocks.  Igneous rocks include granite, pumice and obsidian (often called nature’s glass). Some igneous rocks are non-porous and impervious (like granite) because the particles that make it are so tightly packed together.

Rocks are weathered physically (by sun or heat and cold), biologically (by animals and plants) and chemically (by rain that contains chemicals that break the rocks down).

Erosion is the movement of rock fragments after weathering. Once rock has been eroded it gets washed away and may start to reform new sedimentary rocks. These sedimentary rocks can be change into metamorphic or igneous rocks after a long time, before the process of weathering starts again. This is called the rock cycle.

The type of soil found in any specific area is determined by the types of rock found in that region. The soil is a combination of a range of ingredients that include fine ground up pieces of rock; particles from dead plants and animals; air and soil. It is the amounts of each, in combination with the rock type and proportions of sand and clay that determines which soil type it is. There are three main categories of soil: sandy, clay or loam. Sandy soil is a dry soil with lots of air in it. Clay soil is sticky and doesn’t have much air in it. It tends to hold a lot of water. Loam soil is somewhere between clay and sand and so holds a bit of water, but not too much, and has a fair bit of air in it. Loam soil is generally the best type of soil for growing plants in.

Soil is also layered. If you dig right down you might go through six different layers, the last of which would be rock (often called bedrock). The first layer (O) is mainly organic matter – dead and decaying bits of plant and animal, while the second layer (A) is the topsoil. Topsoil is the part that we dig into in order to plant things. The eluviated layer (E) comes next (although this is not always there) and is quite sandy and clay filled. Then we find subsoil (B) and parent material (C), before hitting the bedrock (R). A soil sample that shows all of these layers (known as horizons) is called a soil profile.

Plants generally need soil to help them grow as it provides them with nutrients, air and water, as well as something the plants can anchor their roots into. The type of soil found in an area will determine which plants will grow naturally and thrive and those that won’t. Specific plants will grow best in specific soil – for example yukka plants like clay soils while lavender likes sandy soils. Most plants will grow well in a loam soil.

Soils also provide a home (or habitat) for a range of creatures. Earthworms and many bugs live in the soil while rabbits and moles, for example, dig their homes underground in the soil. Earthworms are important in the maintenance of soil as they aerate it (add air to it).

Bedrock: the solid rock that is found once you have dug through all the layers of soil.
Clay soil: soil that has a high proportion of clay.
Horizon: a layer of soil in a soil profile.
Igneous: a rock formed from magma either inside the Earth or on the surface.
Impermeable: cannot easily let water in.
Loam soil: a soil which is a fairly even mixture of sand, clay and silt.
Magma: liquid rock that is very hot.
Mineral: of a precise mix of chemical ‘elements’ which are organised in a very specific way.
Metamorphic: a rock formed when existing rock is changed through heat and pressure.
Non-porous: something that doesn’t have any gaps in it that water can get in to.
Organic material: dead or decaying matter found at the top of soil. This lies just on top of the topsoil.
Parent material: the broken rock from which a soil is formed. It is found at the bottom of a soil profile.
Peat: a dark soil that is mainly made from partly decayed plant material.
Permeable: can easily let water in
Porous: something that has gaps in it that water can get in to.
Rock: a solid formed of the particles of one or more minerals.
Rock cycle: the movement and recycling of rocks by nature. Rocks change from one type to another during this process.
Sandy soil: soil that has a high proportion of sand.
Sedimentary rock: rock formed when layers of mineral particles are squashed together
Silt: fine rock particles that are not as fine as clay, but not as coarse as sand.
Soil profile: the various layers if soil from organic matter on top to the bedrock at the bottom.
Topsoil: the first proper layer or horizon of soil which is found when you dig into soil.

Best books about rocks and soil for children 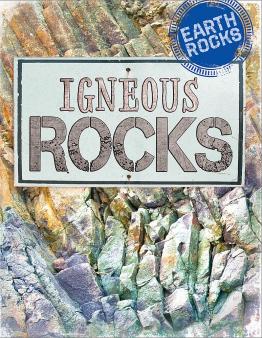 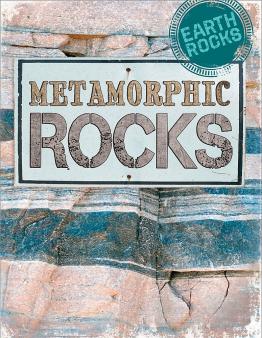 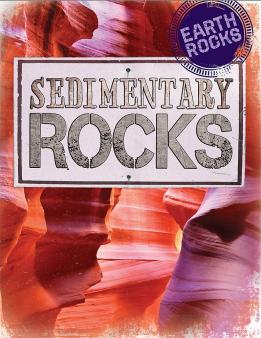 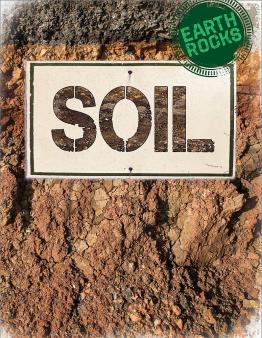 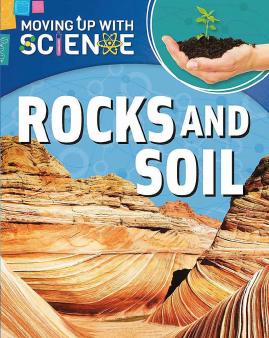 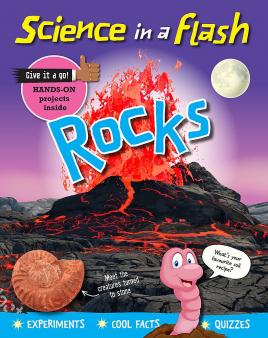 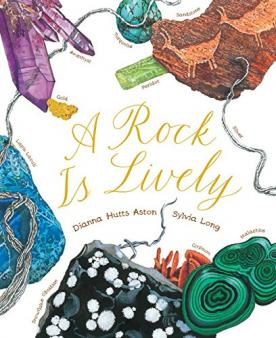 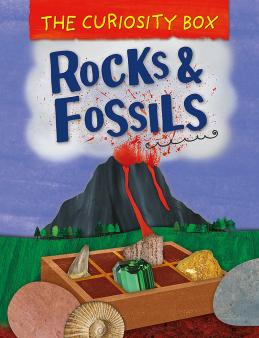 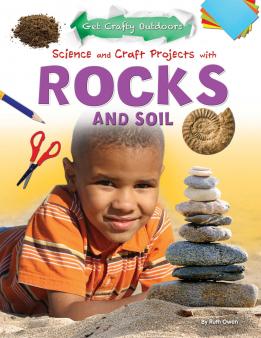 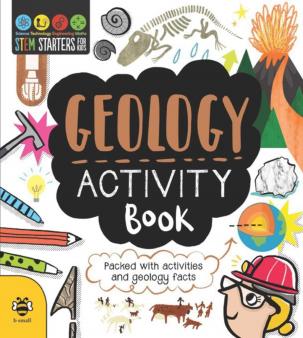 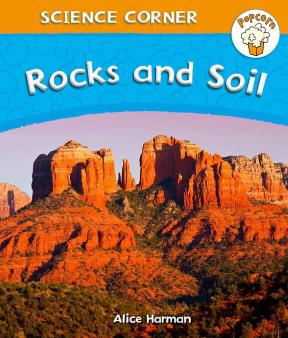 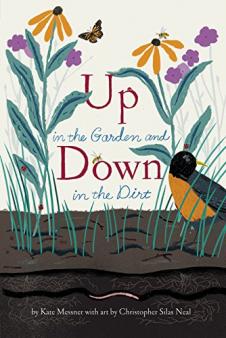 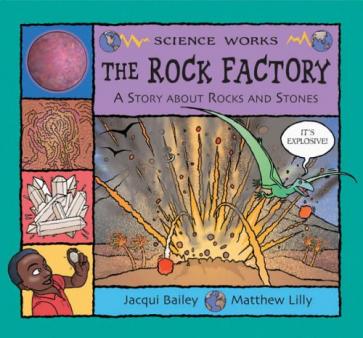 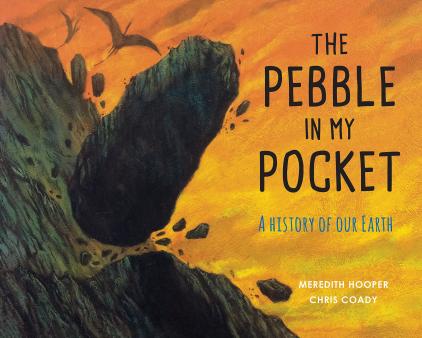 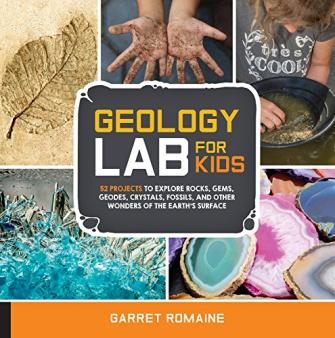