Islam is the world’s second-largest religion.

People who follow the religion of Islam are called Muslims and there are around 1.6 billion Muslims in the world.

Like Christians and Jews, Muslims are monotheistic, which means they only believe in one God who they call Allah, the Arabic name for God.

Islam was founded in the Middle East over 1400 years ago by a man named Muhammad who gave Allah’s message to the people on Earth and introduced the faith of Islam.

Like Christians and Jews, Muslims are monotheistic which means they only believe in one God, who they call Allah.

Although their faiths are different, Christians, Jews and Muslims do share many of the stories and traditions that are told in the Old Testament of the Bible. Muslims believe Jesus was a prophet.

Jerusalem is a holy city to Muslims as it is to Christians and Jews too.

Family life is very important in Islam and it is from their families that children learn about the Qur’an and how to pray. The mosque is also used as a place for children to have classes to learn the Qur’an.

Muslims believe that Allah’s message was passed to the prophet Muhammad after he was visited by the angel Jibril (Gabriel). Muhammad memorised what he was told and wrote down the exact words; this is the content of the Qur’an.

The name Qur’an means ‘that which has been read or recited’. The Qur’an provides Muslims with guidance on all aspects of their life and the Islamic religion is very much based on what it teaches people. Muslims believe that the Qur’an was Allah’s final communication with someone on Earth.

The Qur’an states five main duties for followers of Islam which are known as the Five Pillars.

One of the Five Pillars is Salah, the five daily prayers Muslims must perform. Muslims always wash their face, hands and feet before they pray and always face the direction of the holy city of Makkah.

Islam is thought to be one of the fastest-growing religions. It is currently the second most popular religion in the world after Christianity.

The religion itself began over 1400 years ago, when Muslims believe that Allah sent his final message to the Prophet Muhammad. In the Muslim faith there were many prophets before Muhammad (including Adam, Abraham, Moses and Jesus) but Muhammad is the Final Prophet, so highly regarded by Muslims that they say "Peace be upon him" whenever they speak or write his name.

The Five Pillars of Islam are the five duties that the Qur’an states any Muslim must follow. They are:

A mosque is a place of prayer and worship for Muslims. Friday is a holy day for Muslims; on Friday at noon, the most important religious service of the week is held. A religious teacher called an imam (a 'man of knowledge') leads local prayer and takes care of the mosque.

The very first mosque was the courtyard in the home of Muhammad, who founded the religion of Islam. If you look inside a mosque, you will see a big open space for people to pray and worship Allah. You won’t find pews and seats like in churches; rugs or mats usually cover the floor instead. Mosques are often large buildings with beautiful towers and domes. Outside most mosques is a tall tower, called a minaret. In some mosques this is where a crier or muezzin calls Muslims to prayer from. Every mosque must also have running water as Muslims must wash their face, hands and feet before they pray (ablution). They also take off their shoes when they enter the mosque.

The Ka'ba (or Ka’bah) is an ancient shrine which rests on foundations built by Abraham and Ishmael. Muslims believe it to be holiest place on Earth and all Muslims must face the direction of the Ka’ba while they pray. The Ka’ba is covered in a black cloth, and embroidered in gold and silver with verses from the Qur’an. Every Muslim family, no matter where they live, knows what direction the Ka’ba is from their house.

Women and men don't worship together in mosques. Music and singing are not part of worship in Islam, and there are no pictures of people or animals in a mosque. The Qu'ran forbids the worship of images, and Muslim people also believe that art could never reflect the magnificence of Allah's creation well enough. Islamic art is dedicated to the design of intricate, colourful patterns and to calligraphy, beautiful writing.

Ramadan is part of the Islamic calendar and is the ninth month of the Muslim year. It is a time when Muslims celebrate Allah’s message to Muhammad, the words of the Qur’an, by dedicating themselves to prayer and family. During Ramadan Muslims are expected to fast – not eat or drink – during daylight hours. Each day, Muslims traditionally break their fast with a meal at sunset called the iftar.

Eid means festival in Arabic and the two main festivals in Islam are Eid al-Fitr (Festival of the Breaking of the Fast) and Eid ul-Adha (the Festival of Sacrifice). The end of Ramadan is marked by the festival of Eid al-Fitr. It is a time when friends and family get together and worship at the mosque, good food is eaten, children are given presents and money is given to charity.

Hajj is the Muslim religious pilgrimage to Makkah. It takes place during the last month of the Islamic calendar and every adult Muslim who is physically able must perform Hajj at least once in their life. Muslims from all over the world go to Makkah for Hajj so it is the world's largest annual gathering. Pilgrims wear simple white cloths during the Hajj to show they are not thinking about their clothes or any material things.

Muslim people follow many laws and customs outlined in the Qu'ran. Life stages (birth, marriage and death) are marked by special ceremonies and traditions.

The Qu'ran says that men and women should dress and behave modestly, so Muslim men must wear clothes that cover them from the navel to the knee. Some Muslim women wear a head covering called a hijab.

Food must be halal (allowed); all types of food are halal, except pork or pig meat, which is forbidden (haram). Meat must be slaughtered and prepared according to Islamic principles to be considered halal. Alcohol is also forbidden.

Dates and milk are traditional Muslim foods and they are offered to guests to welcome them to a Muslim home. Dates symbolise sweetness and milk symbolises purity.

Colour in some Islamic patterns 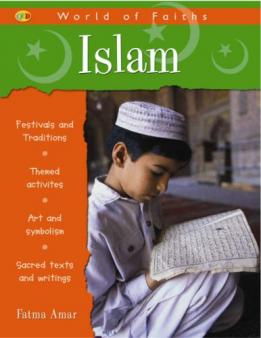 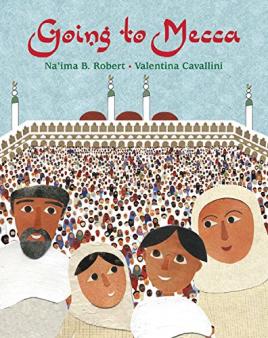 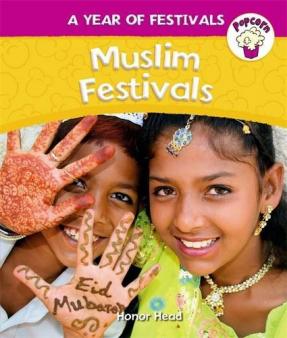 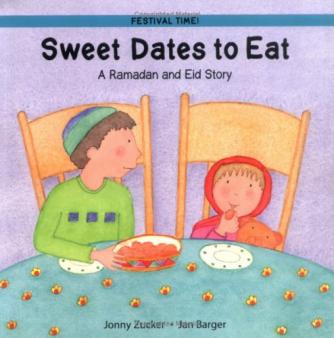 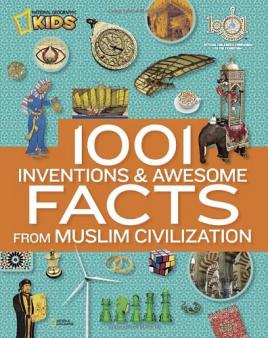 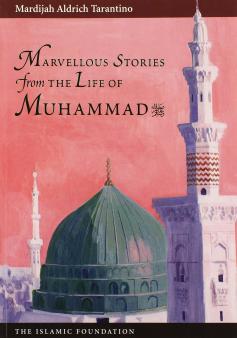 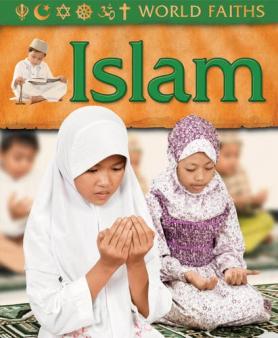 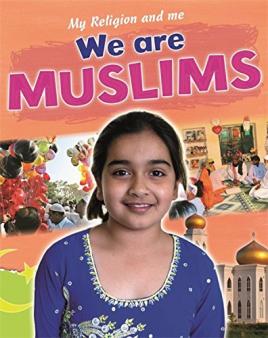 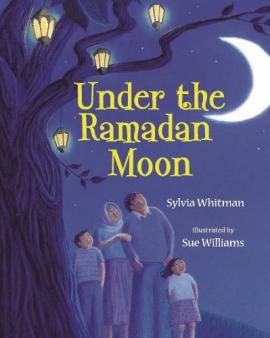 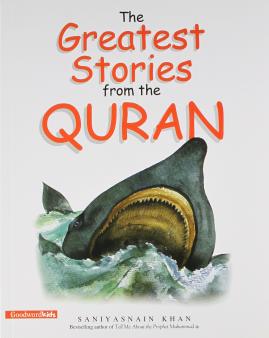 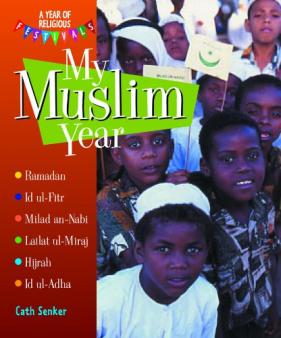 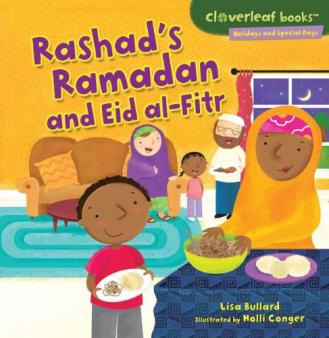 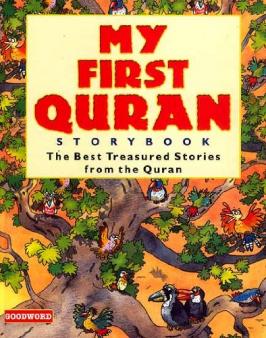 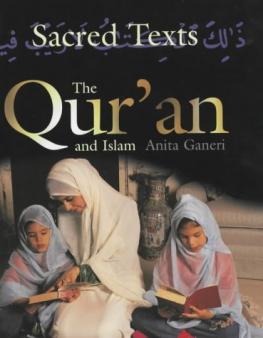 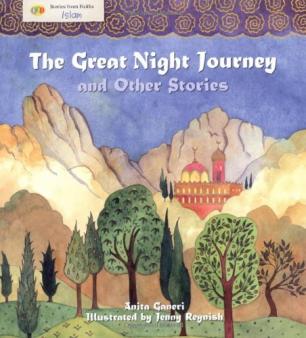 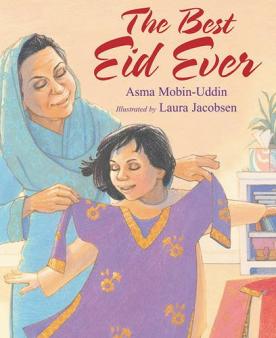 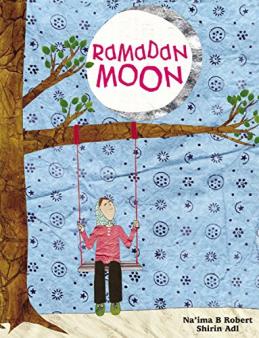 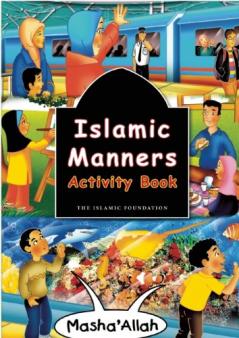 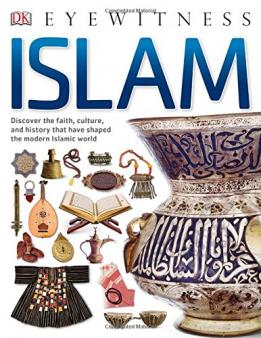 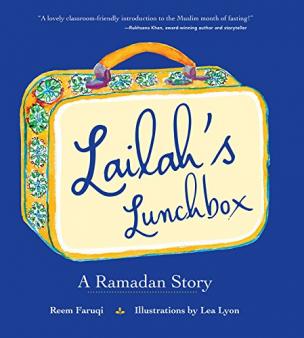 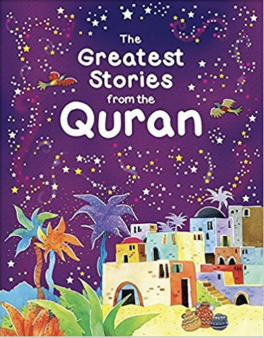 Find out more about Islam

Find out more about every stage of the Hajj, the pilgrimage to Makkah Muslims complete at least once in their life

In a video for KS1 children, Charlie and her favourite soft toy Blue visit neighbour Seyed in his garden to find out more about the Muslim faith

A BBC video about the Qur'an, the holy book of Islam

Watch a video about the five pillars of Islam

The Discover Islamic Art website highlights monuments, sites and artefacts from 14 countries in Europe and the southern and eastern Mediterranean

Allah - the Arabic word for God.

Eid al-Fitr - the festival which marks the end of Ramadan.

Five Pillars - the five acts of worship for followers of Islam.

Hajj - the religious journey to Makkah that all Muslims try to make at least once in their lives.

Imam - a teacher and religious leader in the Muslim faith.

Ka'ba - the first place built for the worship of Allah. All Muslims face it when they pray.

Makkah - the most holy city for Muslims, the place where the Ka'ba is found. Makkah is in modern-day Saudi Arabia.

Minaret - the tall tower in a mosque.

Mosque - the Muslim place of worship.

Prophet - a person who receives a message from God and shares the message with people on Earth.

Qur’an - the holy book of Islam.

Ramadan - the ninth month in the Islamic calendar, when Muslims fast during daylight hours.

Salah - the second of the Five Pillars, the prayers Muslims must perform five times a day.

Take part in Visit My Mosque Day, when 250+ mosques across the UK hold open days to welcome their neighbours from all faiths into their place of worship for an educational visit

See photographs of Ramadan around the world

Explore Islamic art according to the material it uses: ceramics, glass, stone, metalwork or textiles