Shinto is purely Japanese, the ancient religion of the country. The word Shinto means ‘the way of the gods’.

Unlike many other religions, Shinto does not have a founder. Instead it is based on the belief that spiritual powers are thought to exist in the natural world in things like trees, animals, mountains and even people. These spiritual powers or gods are called kami. Japanese people believe the kami will bring benefits like health, business success and good exam results, if they are treated properly.

1. Shinto is the traditional religion of Japan. About 80% of the Japanese population attend Shinto shrines and ceremonies today.

2. In Shinto, spiritual powers or gods are called kami. There are about 100,000 registered shrines in Japan, dedicated to different kami.

3. The Shinto religion has such a large number of gods, it became called ‘the religion of the million gods’; there are up to 80 million different kami in Japan!

4. Many places of Shinto worship are in areas of natural beauty. Japan’s Mount Fuji is home to the sun goddess Amaterasu. Many people make pilgrimages to the mountain.

5. A shrine is the name given to a building of Shinto worship.

7. Before people approach the kami at a shrine they must wash their hands and mouths, so shrines always have running water.

8. In Shinto worship consists of hand-clapping, silent prayer and offerings made at the shrine.

9. In the 20th century, worshipping the Japanese emperor was part of the Shinto faith.

10. Many people in Japan practice both Shinto and Buddhism.

As well as the archway entrance, the torii, large shrines have lots of other gates, bridges and fences to go through.

Each shrine contains an inner hall which only priests can enter. This is where the kami or gods are thought to be.

People pray at home or at a shrine to ask for support in all kinds of aspects of their life. In Shinto, people believe if the kami are treated properly, they will bring benefits like health, business success and good exam results. People can worship at home and at work too.

Many Japanese people will have a tiny shrine in their homes, called a kami shelf, where they make offerings of flowers or food and say prayers.

Men and women can become Shinto priests, and they are allowed to marry and have children. Shinto priests perform Shinto rituals and often live in the grounds of a shrine. Young women known as Miko help the priests during rituals. The Miko have to wear white kimonos and must not be married; they are usually the priests’ daughters.

Shinto gods are called kami. Kami are sacred spirits which take the form of things in the world around us like wind, rain, mountains and trees. Exceptional people can become kami after they die.

The Sun Goddess Amaterasu is Shinto’s most important kami and her shrine is found at Ise. Shinto believers try to visit the shrine of Ise at least once in their lifetime. It is rebuilt every 21 years and the torii entrance is on a beach, surrounded by water at high tide.  Amaterasu's symbol, the rising sun, is on the Japanese flag. Inari, the rice producer, is also a very important kami. This is because rice is such an important food in Japan.

There is no right and wrong in Shinto. People are thought to be good and evil is believed to be caused by evil spirits, so the purpose of most Shinto rituals is to keep evil spirits away by prayer and offerings like rice, water, dried fish or even a dance to the kami.

Purification is an important par of Shinto worship, so people always wash their hands and rinse their mouth before they pray.

For most Japanese people, Shinto really is a way of life. It also does not require people to follow it as their only religion.

Unlike some religions, Japanese people don’t visit shrines on a particular day of the week. They go when it’s festival time or for personal reasons. People turn to the kami when they are hoping for things to go well in their lives or to thank them for something good that has happened.

Ema are wooden "wishing tablets" where people write their prayers. The ema are then hung up at a shrine. In exam season it's very common for children to buy special "exam success" ema to hang at their local shrine. The pictures on the ema are often specific to each shrine and might be of the zodiac or of particular animals or people.

There are shrines all over Japan, about 80,000 in total! Each shrine has an annual festival where people come to pay their respects to the kami and celebrate with food and drink.

At New Year it is common for children to buy decorative arrow good luck charms called hamaya (literally "demon-breaking arrow") at Shinto shrines. Shinto tradition is full of stories of demons who were vanquished by humans or gods with a bow and arrow; in the stories the twanging sound of the bow can be enough to scare monsters away.

The torii archway or gate at the entrance of the shrine is meant to symbolise a barrier between the real world and the spirit world. In the shrine, sacred objects such as rocks and trees have special ropes called shimenawa and white paper strips attached to them.

Many Japanese customs, such as using wooden chopsticks, and removing shoes before entering a building, originate from Shinto beliefs.

Celebrate the Setsubun festival by making a card

Try your hand at some Japanese traditional dances, a big part of Shinto festivals 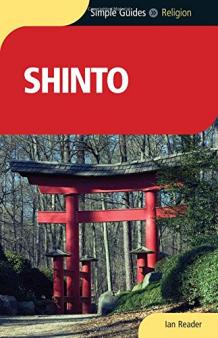 The BBC overview of the Shinto religion

An encyclopedia guide to Shinto for children

Read about ema, the wooden prayer tablets found in shrines

A complete calendar of Japanese holidays and annual events

A list of all the Shinto festivals in Japan

Find out about Shinto holy books

Find out why mirrors are important in Shinto

Inari - the Shinto goddess of rice

Jinja - the name given to Shinto shrines or sanctuaries

Miko - a young woman who helps a Shinto priest

Mikoshi - portable shrines used in Shinto festivals. They are carried in the streets; the largest can weigh several tonnes and require hundreds of people to carry them!

Mount Fuji - the most famous of Japan's sacred mountains

A guide to the objects typically found in a Shinto shrine

Itsukushima Shrine was registered as a World Heritage Site in 1996

Shinto in pictures: see images of festivals, shrines and more