Sikhism began over 500 years ago in an area called the Punjab in India. It was founded by a man called Guru Nanak and is based on what he taught people.

There are over 25 million Sikhs all over the world, although most still live in India. Sikhism is the world's fifth most-popular religion.

Sikhs believe in one God who guides and protects them. Sikhs see everybody as an equal. Leading a good life, doing good things and making the right choices are an important part of the Sikh faith.

Sikh temples, called gurdwaras, are built with a large central dome. They have four doors to show that they are open to all people. There are no pictures or statues in the gurdwara. Before Sikhs go to worship at the gurdwara, they must take a bath. To show their respect to God, shoes are removed before they enter and people cover their heads. Children often practise singing hymns or learn to play instruments in their local gurdwara.

The symbol or emblem of Sikhism is known as the Khanda.

The Sikh flag is called the Nishan Sahib and is found outside the gurdwara. The term nisan means ‘flag’ and sahib is a term of respect. The Nishan Sahib is orange, with a black Khanda symbol on it.

The Sikh holy text, the Guru Granth Sahib, is exactly 1430 pages long in its printed form, and all the hyms in it are printed in the same order so Sikhs throughout the world can read it in the same way.

Many Sikhs wear a metal bracelet called a kara which helps to remind them of their faith.

The city of Amritsar is very important to Sikh people. Amritsar is situated in the Indian Punjab where Sikhism originated. It houses a great temple called Hari Mandir, or Golden Temple, and is visited every year by thousands of Sikhs from all over the world. There is a huge sacred pool around the temple and Sikhs bathe in it and call it a "pool of nectar".

When a new baby is born, the whole Sikh community likes to celebrate. The new father shares the news with family and friends and gives out boxes of sweets too! New babies are named at a ceremony at the gurdwara: the Guru Granth Sahib is opened at random and the person celebrating the baby reads out the first letter on the left-hand page. The baby's parents then choose a name which begins with that letter and the name is announced to the congregation (the people attending the service).

When a child is older, they will take amrit which is the ceremony a person goes through when they are ready to commit to begin a Sikh.

Many Sikhs are vegetarian.

Until they are old enough to wear a turban, Sikh boys (and some girls) keep their long hair tidy by tying it up in a piece of cloth called a patka.

Turbans are sacred head-coverings for Sikhs and their importance to the Sikh faith is recognised by governments; for example, in Britain, Sikhs can wear their turban as an alternative to a motorcycle helmets or hard hats on building sites.

At some Sikh weddings the bride's hands are decorated in beautiful patterns with henna dye.

Guru Nanak, the founder of the Sikh religion, was born in a small village on a flat green plain known as Panjab in India. He was born into a Hindu family but grew up among both Hindus and Muslims.

Sikhs believe that Guru Nanak was spoken to by God. God urged him to go out and teach people how to follow a simple faith and so he did just that. He preached his message far and wide, encouraging others to forget their differences and live as God wanted them to. Guru Nanak’s message was quite simple: pray to God, work hard, be honest, care for your family and your community. The people who listened to Guru Nanak and began to follow him became known as Sikhs – in other words his ‘learners’ or disciples.

The ideas Guru Nanak first taught still remain at the centre of Sikhism. The religion’s philosophy is that all human beings are equal. Sikhs must remember God in their daily life, work hard and live honestly and share with others. Sikhs respect other religions even though they themselves choose to follow the teachings of the Gurus.

Before he died, Guru Nanak chose Guru Angad to succeed him. There were 10 human Gurus altogether.

Sikhs often display their commitment to their religion by wearing the Sikh articles of faith, which are known as the 5 Ks. They consist of:

Sikhs can pray anywhere and at any time (though they often start each day with the morning prayer, japji). They don't have a holy day of the week.

Sikhs celebrate many festivals. At every festival, the Guru Granth Sahib is read continuously from beginning to end, which takes about 48 hours!

The most important Sikh festival, Vaisakhi (also known as Baisakhi, Vaishakhi, or Vasakhi), marks the Sikh New Year and involves music, dancing and sport. At Vaisakhi Sikhs remember when the Khasa was created and takes place in April. It also celebrates the harvest.

Like Hindus, Sikhs also celebrate Diwali, the festival of lights. During the Hola Mahalla festival Sikhs show off their ceremonial fighting skills with parades and pretend battles and compete in sporting contests. The Gurpurb festivals celebrate the Gurus' lives and often include processions in which the Guru Granth Sahib is carried through the streets.

The amrit ceremony is a confirmation ceremony, when boys join the Khalsa. Boys wear the turban for the first time and drink the amrit, a holy nectar prepared by mixing water and sugar. The amrit is also sprinkled on the person's hair and eyes. After the ceremony a special food called karah prasad is eaten by everyone in the gurdwara. It's made from flour, sugar and ghee (clarified butter).

Practise reading and writing the numbers 1 to 10 in Punjabi (when Punjabi is written down, the script is called Gurmukhi).

Make your own Sikh flag, the Nishaan Sahib

Kiddie Sangat is a Sikh activities website with loads of craft ideas, including Vaisakhi cards, Khanda crafts, a 5Ks little book and more

Sikh Puzzles is a Punjabi and Sikh vocabulary-building game for children, available for Android devices

How much do you know about the Sikh festival of Vaisakhi? Take a Cbeebies online quiz to find out

Make some Vaisakhi recipes like creamy lentils and rice or spinach, aubergine and chickpea curry

A Vaisakhi tradition is to fly a kite (patang), sometimes decorated with verses of poetry. Why not make a lion kite of your own? 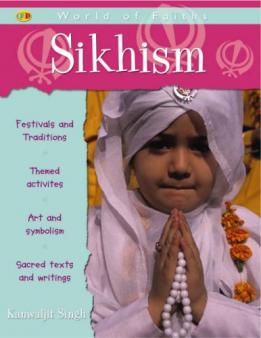 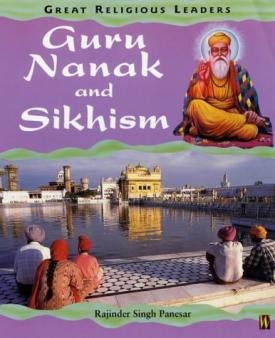 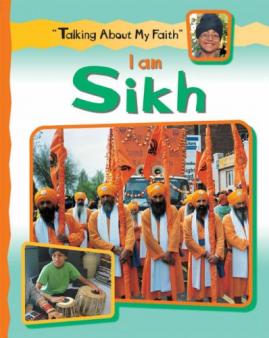 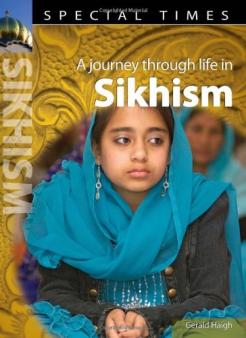 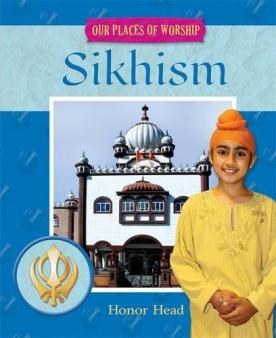 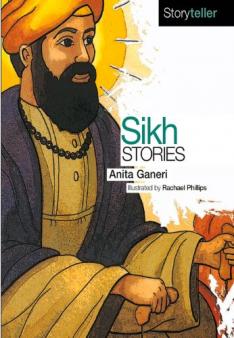 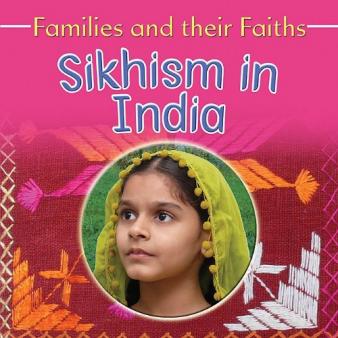 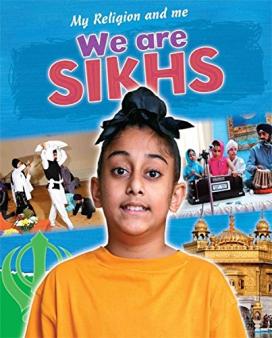 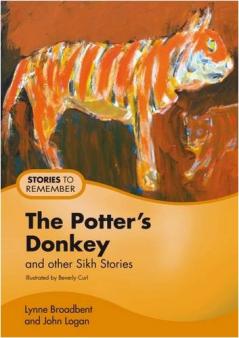 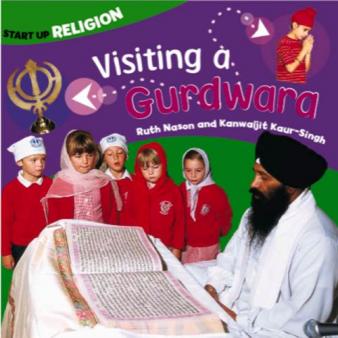 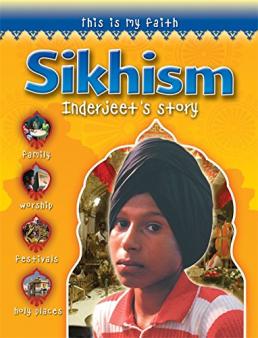 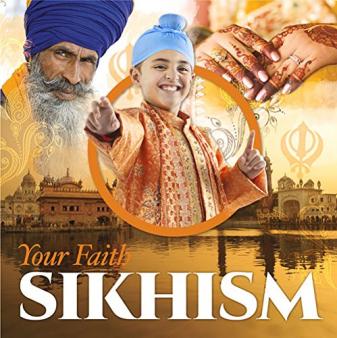 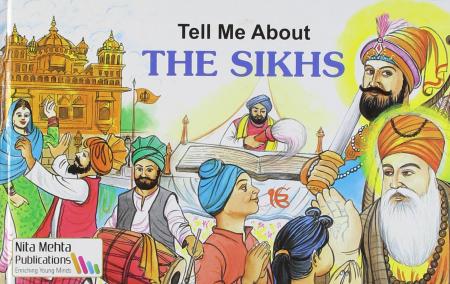 The BBC Bitesize website has KS2 videos about how Sikhism started, the five Ks and their importance, Sikh traditions, the Gurdwara and Sikh celebration and worship

Information about how Diwali is celebrated by Sikhs

Watch an animated story for KS1 children on the BBC Teach website: the story of The Milk & The Jasmine Flower and the story of Duni Chand & the Silver Needle

See a video explanation of the Sikh symbol, Khanda

Watch an animation about the life of Guru Nanak, the founder of the Sikh religion

Guru Granth Sahib - the Sikh holy book, seen by Sikhs as a live Guru to be followed

Gurus - the Sikh’s holy teachers; there were 10 human Gurus altogether

Harmonium - a musical instrument similar to a piano

Khanda - the symbol of the Sikh faith

Langar - the dining room in the gurdwara where food is served

Rumala - the piece of cloth that covers the Guru Granth Sahib